America was at war in the Atlantic and the Pacific, when an aircraft carrier appeared on the horizon. A squadron of Navy planes buzzed overhead and started landing on the carrier, refueling and then taking off. All day long, the planes landed and took off. Occasionally, a plane overshot the deck runway and ditched in the water. Rescue boats raced to save the pilot.

Just a few miles away, on shore, traffic backed up on Chicago’s Lake Shore Drive as drivers rubbernecked to watch.

And 892 miles away—by water—hundreds of Buffalo ship workers toiled to turn out a second aircraft carrier for the Great Lakes.

When they finished, the USS Sable would join the USS Wolverine on Lake Michigan to form the U.S. Navy’s “Corn Belt Fleet.” This was an odd-looking flotilla: side paddle-wheel aircraft carriers belching clouds of smoke from their coal-fueled boilers.

More than 17,000 Navy pilots qualified to take off and land on the Wolverine and Sable. As many as 40,000 sailors got training as flight crews. Naval historians have said the pilots who learned these on two carriers “were the top guns of 1943.”

And they had a Buffalo shipyard to thank for providing them with the two training ships—the only fresh-water aircraft carriers ever built in the world.

Following the attack on Pearl Harbor in 1941, 13 U.S. aircraft carriers were on order or under construction and the Navy needed to train thousands of pilots to take off and land on these ships. But how to do that? The Navy’s six fleet carriers were already in combat. And German U-boats and Japanese submarines prowled the American coasts.

Navy brass decided the safest way to train pilots was on aircraft carriers on the Great Lakes. To do that, the Navy found two luxury steamships—the SS Seeandbee and the Greater Buffalo—and sent them to the American Shipbuilding Company in Buffalo.

Great Lakes ships and canal boats had been built and repaired in Buffalo since 1808, but what the Navy now wanted had never been done before.

Some Navy officers were skeptical. When Cmdr. Richard F. Whitehead, aviation aide at the Great Lakes Training Center at Glenview Naval Air Station near Chicago, first proposed the idea of converting Great Lakes steamships into aircraft carriers, he was ignored. But after the attack on Pearl Harbor, his idea caught fire.

If you drive down Buffalo’s Ganson Street, toward Riverworks and the Labatt Blue six pack, you’ll see a huge vacant lot surrounded by a fence topped with barbed wire facing the Buffalo River. It is empty, save for a few tractor trailers.

Nothing there now hints that this was where more than a thousand welders, iron workers, carpenters and other ship workers labored night and day to transform two legendary lake passenger ships into aircraft carriers.

This was the location of the American Shipbuilding Company’s Buffalo yard.

Nathan Bidwell set up a shipyard here in 1808 to repair Great Lakes ships and provide crews and ship captains with nautical necessities with his chandlery. The business boomed after the Erie Canal opened, and his yard soon expanded. A couple decades later, five graving docks for vessel haul-out and construction had been dug to accommodate canal barges and lake freighters.

But by World War II, the work at the shipyard was primarily repairing ships.

And that was the task it was to take on for the Navy.

This luxurious Great Lakes coal-burning, side-paddle wheeler would have made Mark Twain envious. Built in 1913, the 500-foot long vessel could carry 1,500 passengers and had 500 private cabins, a saloon and a formal dining hall. It had mahogany paneling, padded furniture and more than 400 fancy bathrooms. At that time, it was the largest and most expensive sidewheel steamship on the Great Lakes.

During its heyday, the Seeandbee made regular stops in Buffalo, Cleveland, Detroit and Chicago. In June 1940, the Erie County Democratic Party hired the ship to take more than 1,200 guests on a party cruise that lasted from 1 p.m. to midnight, according the Buffalo Courier.

But when the Seeandbee was towed into the Buffalo shipyard in the early spring of 1942, it looked nothing its old majestic self. The top decks already had been removed in Cleveland. Now the makeover would begin.

The job of converting the passenger ship into an aircraft carrier began on May 10, 1942.

“Like bugs on the plated back of a turtle, a thousand or more workers are rushing the Seeandbee to completion as an aircraft carrier – the first ever to ply the Great Lakes,” the Buffalo Courier reported. “...the giant passenger boat, fastest steamer on the lakes and possibly the fastest on any inland waterway, will be finished and ready for the Navy about 70 days after conversion work was started.”

The vessel was too large to be worked on in dry dock, so the transformation occurred while the ship was anchored. At its peak, 1,250 ship workers labored in round-the-clock shifts.

Crews fitted her hull with an oak flight deck, similar to the carriers then in combat. A small bridge along the starboard side also was added. Forty-five miles of welding went into the job, the Courier reported.

“The amazing total of 57,000 bolts went into her, and a like number each of washers and grommets—packing which makes the bolts watertight.”

Buffalo residents knew that something special was happening at the shipyard, but the curious were kept away.

“One last word or warning to persons who may be thinking of going to the scene to get a close look at the carrier: You won't get near it,” the Courier reported. “A Coast Guard substation has been set up at the site and the area fairly bristles with armed Coast Guardsmen. Cars are not allowed to approach and pedestrians are chased. Just be satisfied it's there. You have our word.”

When the job was completed and the Wolverine commissioned on Aug. 12, it had a flight deck 550 feet long, about two thirds the length of a fleet carrier. Although it did not have hangars, elevators or catapults, the Wolverine did have a galley and sleeping quarters.

The commissioning ceremony on Aug. 12, 1942 was closed to the public and only a few dignitaries attended, along with the crew. Roughly 500 ship workers, their faces “marked with crease and dirt,” according to the Courier, were still on board.

“If you men work as hard and determinedly as these men who worked to convert this ship, we will have the ultimate in efficiency,” he said.

Just a few days before it was ready, the SS Great Buffalo, with its three tiers of state decks towering 80 feet above the waterline still in place, arrived at the shipyard. It would take longer to convert the “Majestic of the Great Lakes” into a carrier.

The Greater Buffalo was a little younger and a little bigger than the Seeandbee. She was built in 1923 and was 536 feet long—longer than the One Seneca Tower is tall (529 feet). She could carry 2,127 passengers and was equipped with 625 staterooms. It took some 275 officers and crew to run her. She also could carry 103 vehicles on her main deck.

Unlike the Seeandbee, when the Great Buffalo arrived in Buffalo for conversion, it was mostly intact. In addition, the Navy wanted to test a steel deck on this training vessel. So it was not ready for commissioning until May 8, 1943.

But when the job was completed, the Sable was outfitted with eight arresting cables, a lecture room on the main deck, bunks for 21 aviators, a sick bay, operating room, laundry, tailor shop, crew quarters, a cafeteria-style galley for the crew and mess hall for the officers.

Several crew members assigned to Sable were survivors of the USS Lexington, scuttled after it was severely damaged in the Battle of the Coral Sea.

On a bitter cold January day in 1943, more than 1,000 Buffalo ship workers gathered outside as an Army-Navy “E” pennant for “excellence in the production of war implements” was raised over the American Shipbuilding Company shipyard.

A rear admiral standing on a makeshift stage heralded their accomplishment of the summer before while an American flag unfurled in a stiff wind.

“With the work of your hands, we are training men in ships you have converted from peacetime traffic,” Rear Admiral Wat T. Cluverius. “Once a man who had the temerity to suggest that ocean sailors could be trained on the Great Lakes was laughed at. But now that idea has proved to be one of the greatest of the war.”

As the admiral ended his speech, the workers returned to work to transform the Greater Buffalo into the USS Sable.

Anchored at night at the Navy Pier in Chicago, the two sidewheel flattops headed out onto Lake Michigan every morning from 1942 through 1945.

Pilots in training took off from the nearby Glenview Naval Air Station, landed on the carriers and then took off again. They were required to make 10 successful takeoffs and landings (later reduced to eight) to qualifying as carrier pilots. Training occurred from dawn to dusk, including winter.

Among the 17,800 pilots who qualified on the carriers was future President George H.W. Bush.

“I remember those Great Lakes flights very well in the open cockpit that winter,” Bush once said. “Coldest I ever was in my life.”

After the war, though, the carriers were sold for scrap. But their contributions to the war effort, and thus the Buffalo ship workers’ exceptional transformation of the passenger ships, are noted by military historians.

“While these freshwater fighting ships faced no enemy and fired no shots in anger, both were invaluable to the American war effort,” Military History Now states. “Together, they prepared thousands of naval aviators for the dangerous job of landing planes on pitching and rolling flight decks at sea.”

Katharine Hepburn became the model for the modern American woman during the middle of the 20th century. She spoke her mind, once musing “I have not lived as a woman. I have lived as a man.” She wore trousers, which for her time was considered scandalous. She spurned the Hollywood glitz and social life and did not show for 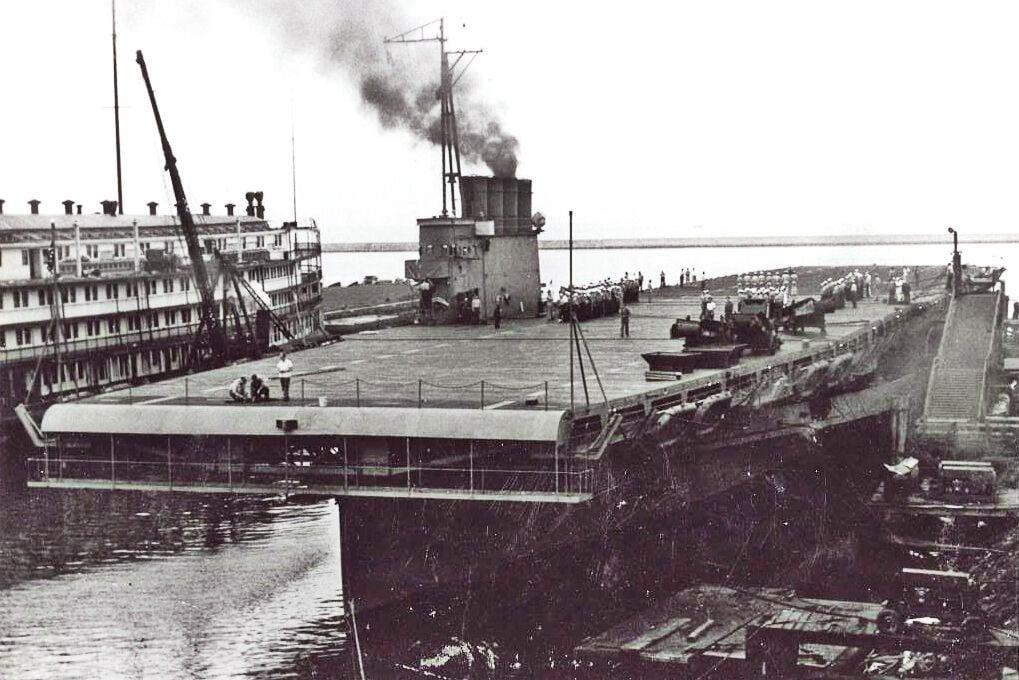 The luxury lake passenger ship SS Seeandbee, converted and rechristened the USS Wolverine. To its left, the Greater Buffalo at the onset of construction into the USS Sable. More than 17,000 Navy pilots qualified to take off and land on these converted aircraft carriers. 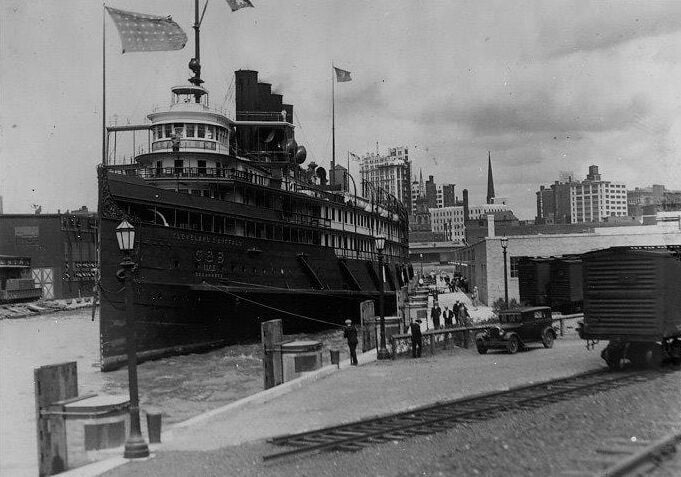 The SS Seeandbee was too large to be worked on in dry dock, so the transformation occurred while the ship was anchored. At its peak, 1,250 ship workers labored in round-the-clock shifts. 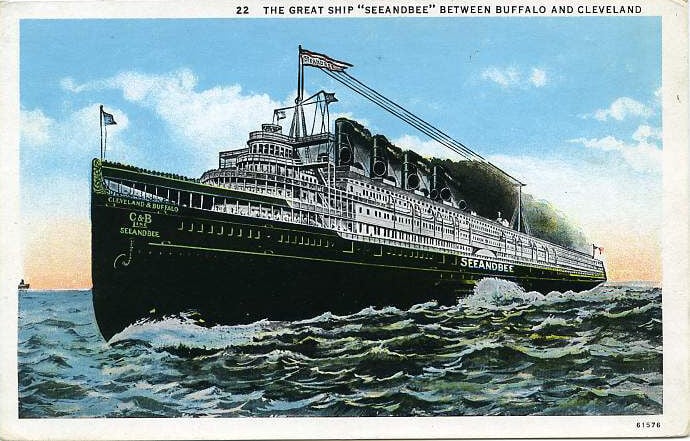 The Seeandbee arrived in Buffalo partially stripped: the top decks were removed in Cleveland, expediting the conversion. 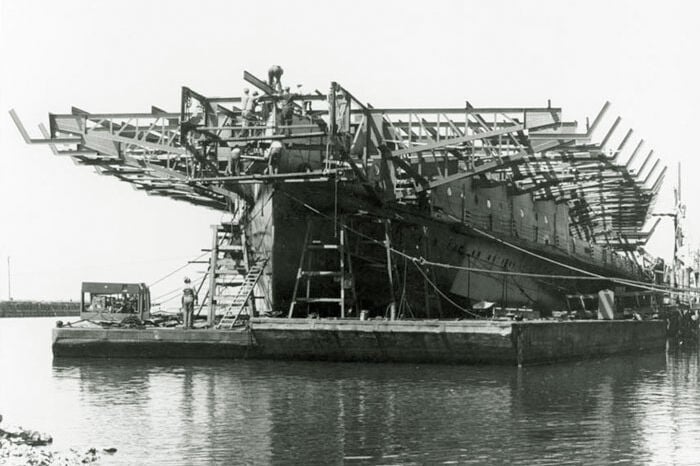 Work began on May 10, 1942—and the USS Wolverine was commissioned mere months later on Aug. 12. 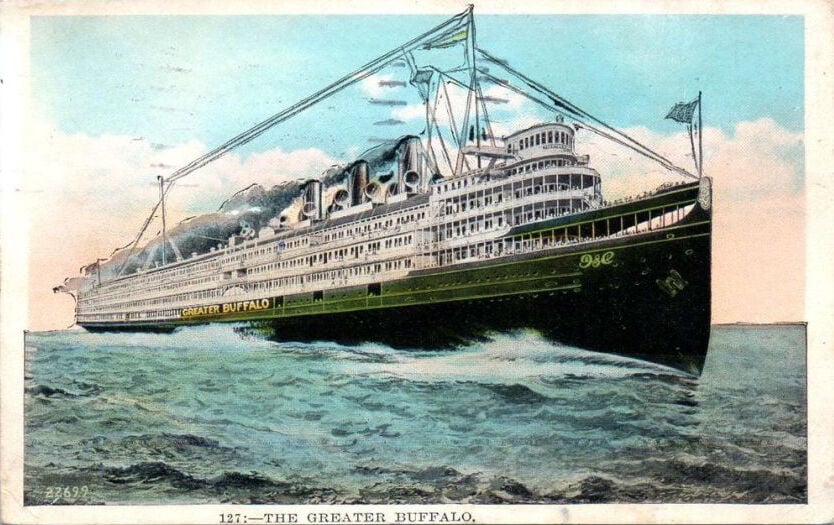 The Greater Buffalo was longer than the One Seneca Tower is tall (529 feet). Her conversion into the USS Sable took longer, as it arrived mostly intact—and the Navy wanted to test a steel deck. 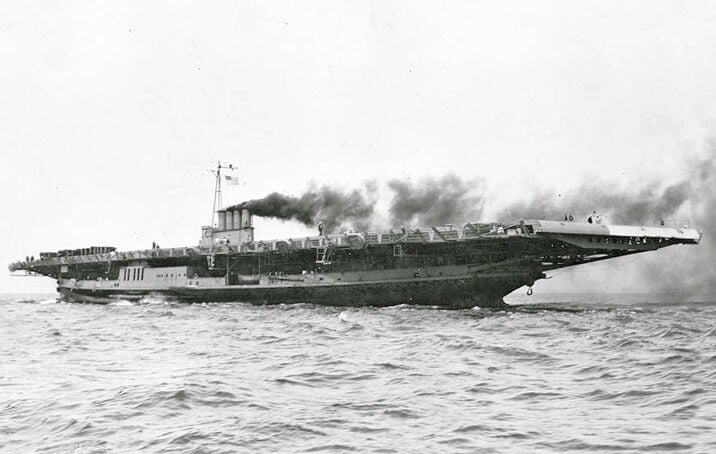 The Wolverine made for an odd sight as it steamed out of Buffalo, a side-paddle wheeler aircraft carrier with plumes of smoke puffing from its coal-fired boilers, headed for Chicago, where aviators and sailors waited to be trained.