Can a home be both Pinterest-board fodder and the stomping grounds for a family that includes three children aged 3 and under?

Thanks to a tasteful renovation project that tackled four of their house’s most-used spaces at once, Elizabeth, Matt, their three daughters (3, 18 months and 2 months) and the family dog can hang out in a home’s heart that’s as beautiful as it is functional.

Built in 1889, the Elmwood Village house was big on space, but needed some reorganization. With the help of Raelyn Woltz, owner and principal designer of West End Interiors, the family transformed their interconnected dining room, kitchen, half bath and butler’s pantry to make them as open, useful and easy-to-clean as possible.

First, they removed a half wall between the dining room and kitchen. Then the kitchen was gutted and its utilitarian aspects—the gas range, built-in fridge, island sink and dishwasher—repositioned to improve the flow for everyday tasks like dishwashing, dinner-making and toddler-minding.

Just off the kitchen is a butler’s pantry, which now features one of the original built-in, glass-front cabinets alongside modern, enclosed ones. There’s also a marble-topped coffee bar to keep essentials off the prep spaces in the kitchen. With a doorway on each of the pantry’s four walls, arranging ample storage within posed a challenge.

The dining room and half bath, both adjacent to the kitchen, each got a decor refresh to create a visually cohesive space. All told, the renovation took nine weeks to complete.

“These spaces are a great mix of traditional and modern,” said Woltz. “I think this is a good example of not being nervous about putting a modern kitchen in an older home. There’s nothing wrong with matching the kitchen aesthetic to the period of the home, but you can break the rules and you shouldn’t be scared to do that. If it’s done right, it’ll flow with the rest of the house.”

The key to seamlessly balancing past and present in a way that fits an old home occupied by a young family, says Woltz, is to tie the spaces together with carefully chosen wallpaper, fixtures and textures. Repeating select patterns and materials creates continuity between the distinct spaces of the open floor plan.

The most prominent feature of the room quartet is a William Morris wallpaper with a navy-blue backdrop laced with intricate art deco-style pale greenery and powder blue flowers. It papers the largest dining room wall, an accent wall in the half bath and the back wall inside the glass-front pantry cabinets.

Plush navy chairs with brass frames pull the wallpaper’s deep blue into the center of the dining room, with standard-height versions around the farmhouse table and matching bar-height ones at the kitchen island.

While a bold wallpaper has the potential to overwhelm a space, this renovation employs huge swaths of clean, wipeable white surfaces in the form of whole walls, accent rugs, window sheers, countertops and cabinetry to instill an open, airy feel with adequate room for the eye to rest.

The gilded warmth of brass was the material of choice for accents in each room, including bathroom and kitchen faucets, mirrors, light fixtures and the focal point of the kitchen—a brass cylindrical range hood the couple had custom-made to fit comfortably between two windows.

“Thankfully we did all of this when our oldest was a year-and-a-half old, and the only baby,” says Elizabeth. “Now that we have three babies, we spend a lot of time in here and love how much storage there is. And how easy it is to keep clean!” 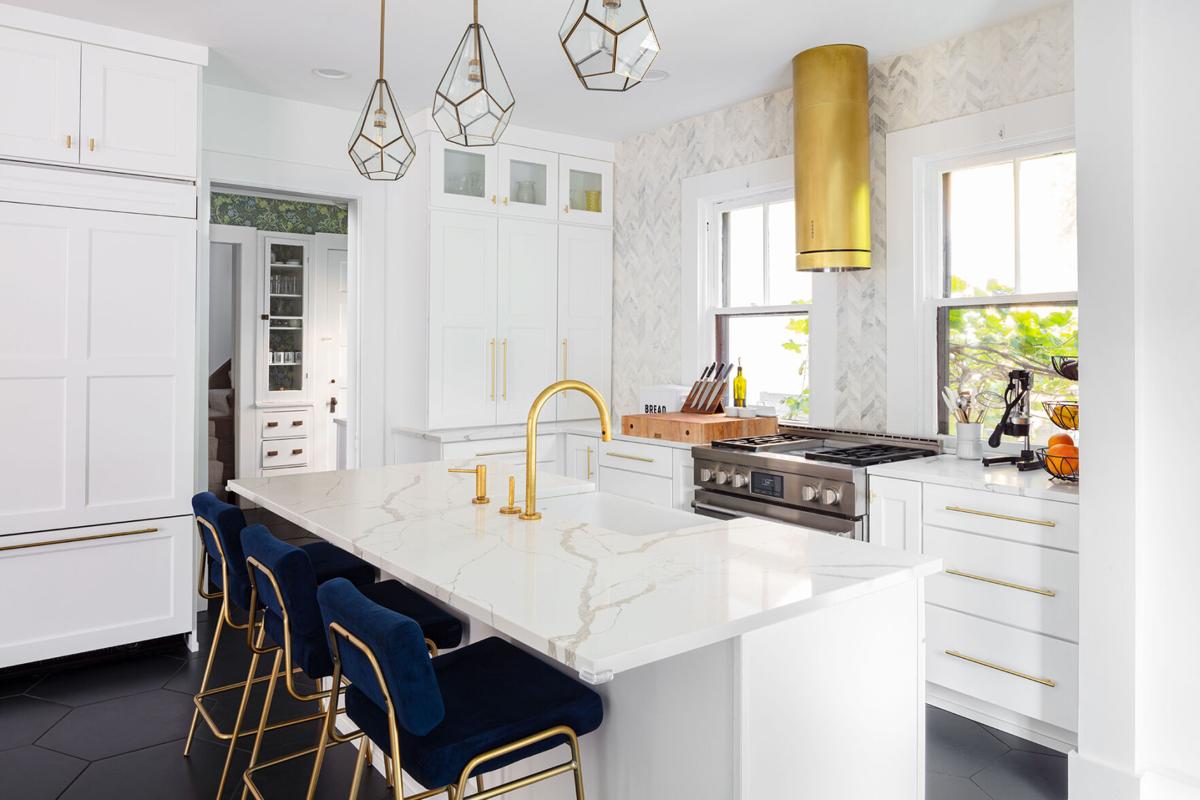 To keep the large swaths of white from looking monotonous, the kitchen’s cabinets and built-in appliances are set at varying depths to create visual interest. 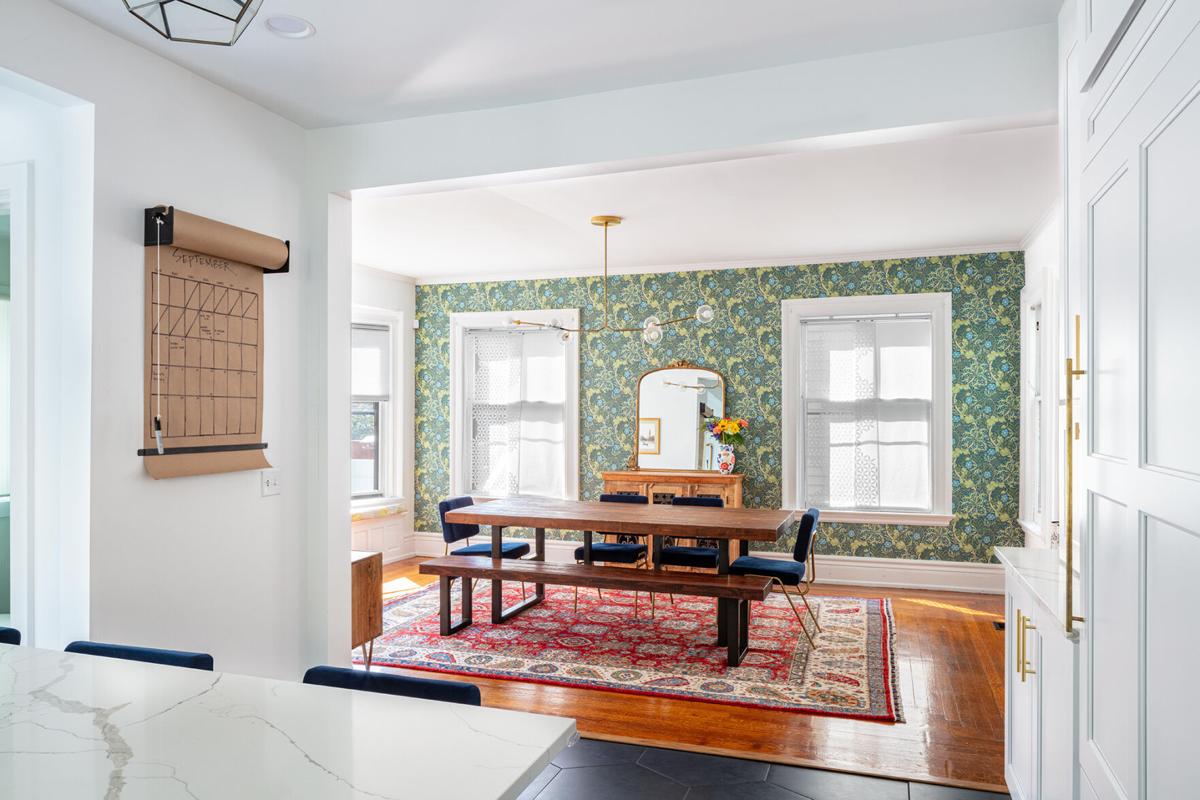 Elizabeth saw this timeless wallpaper in a restaurant near their Charleston, South Carolina home just before they moved back to Buffalo and scoured the internet until she found it. 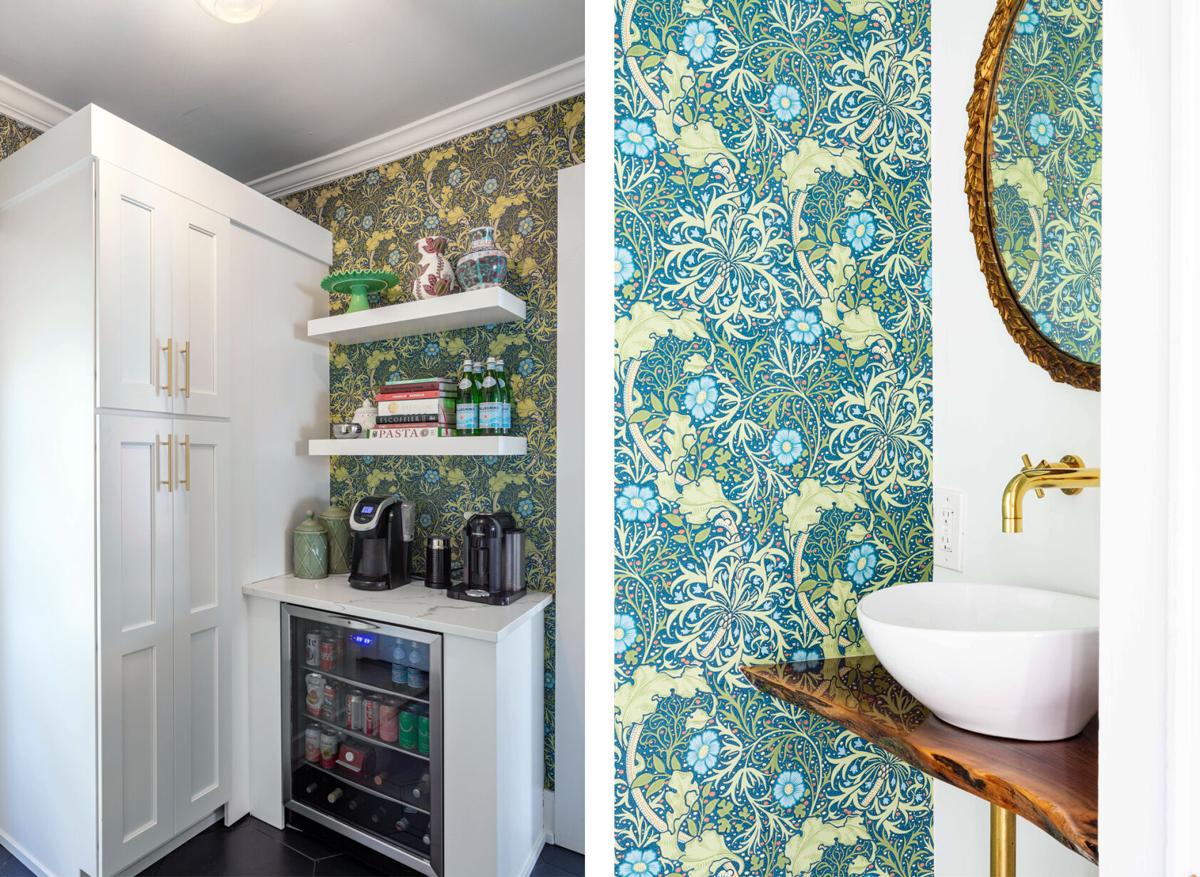 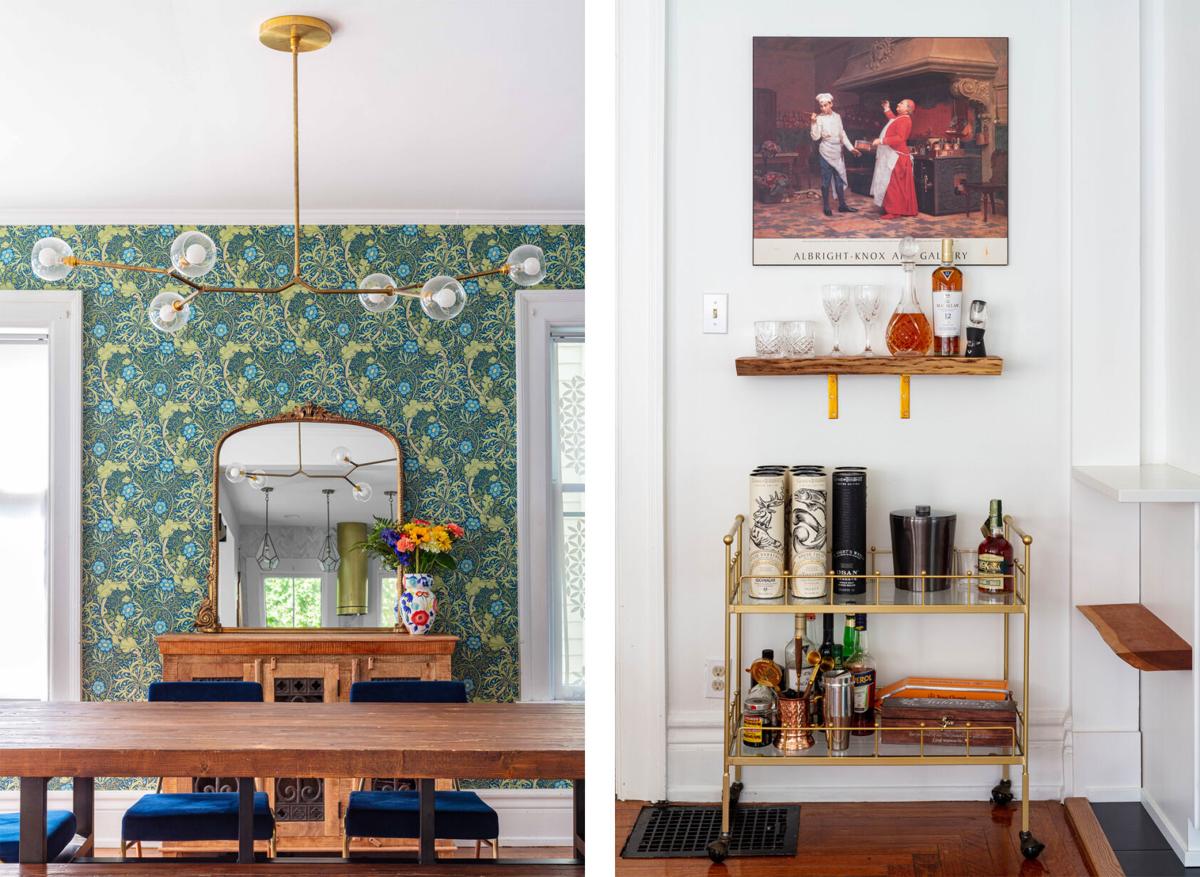 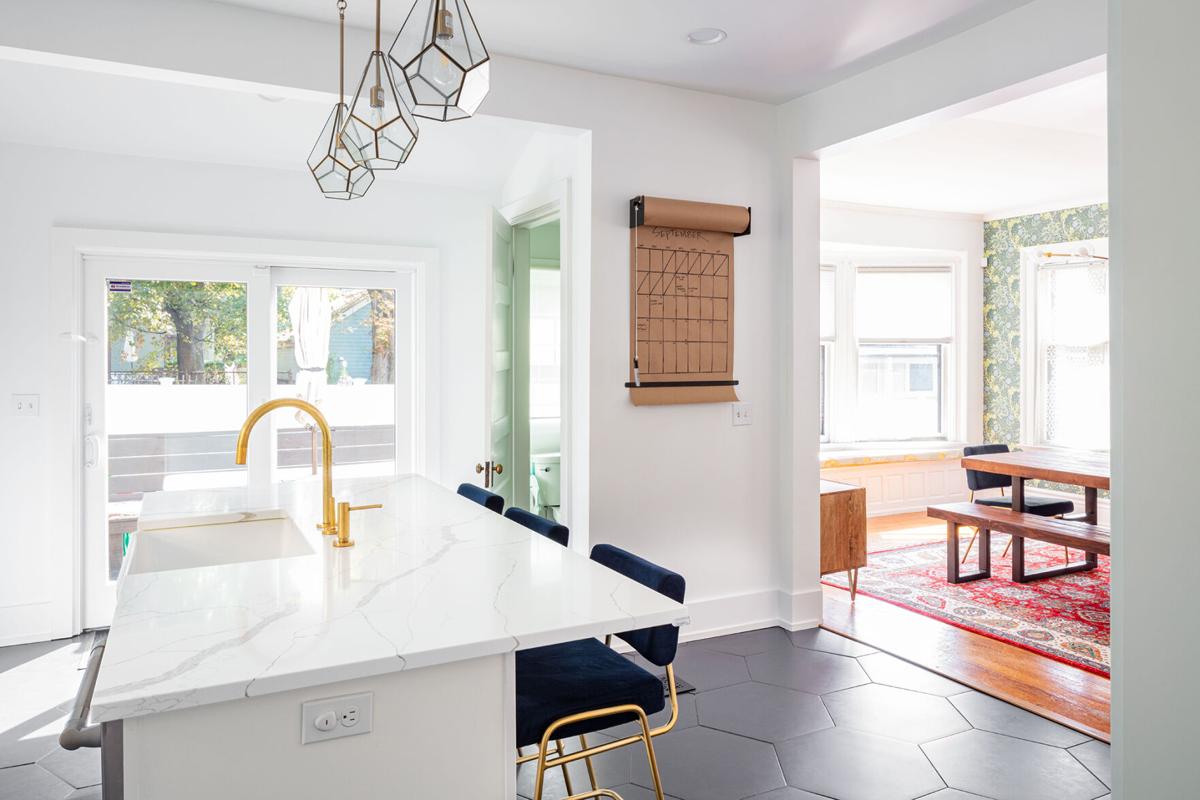 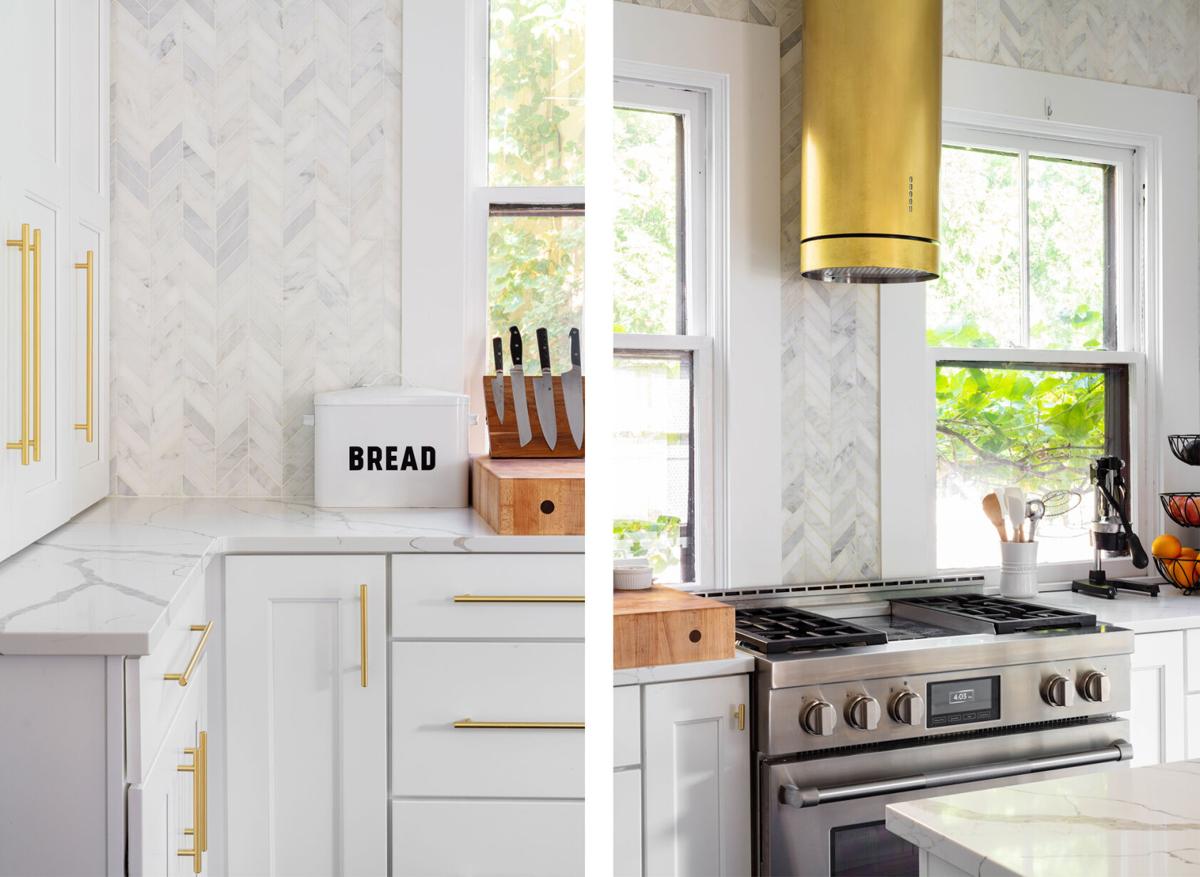