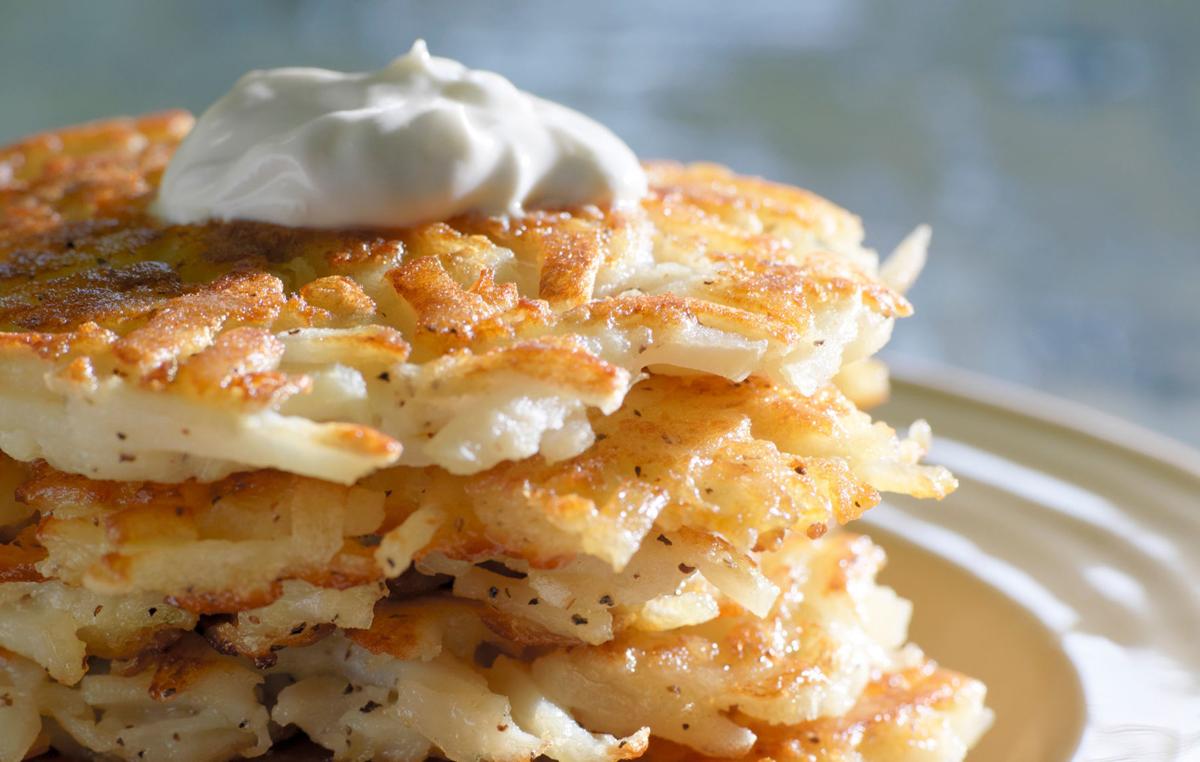 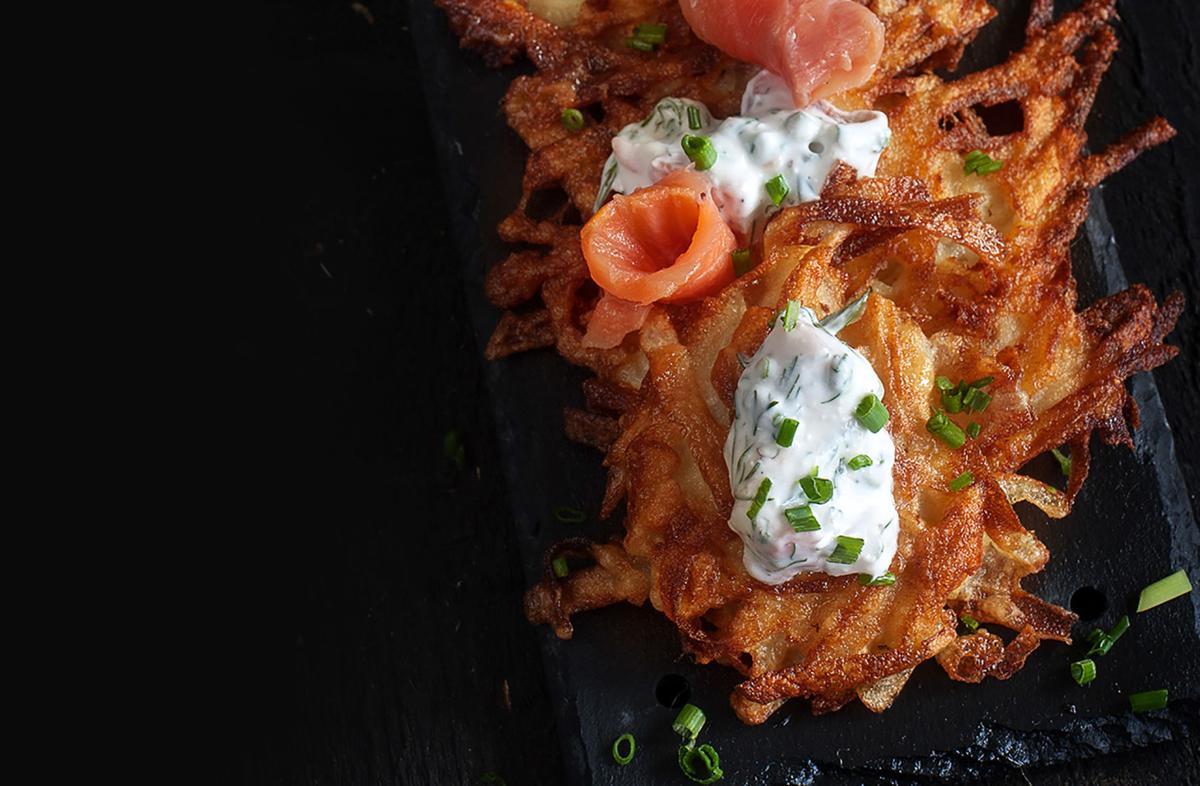 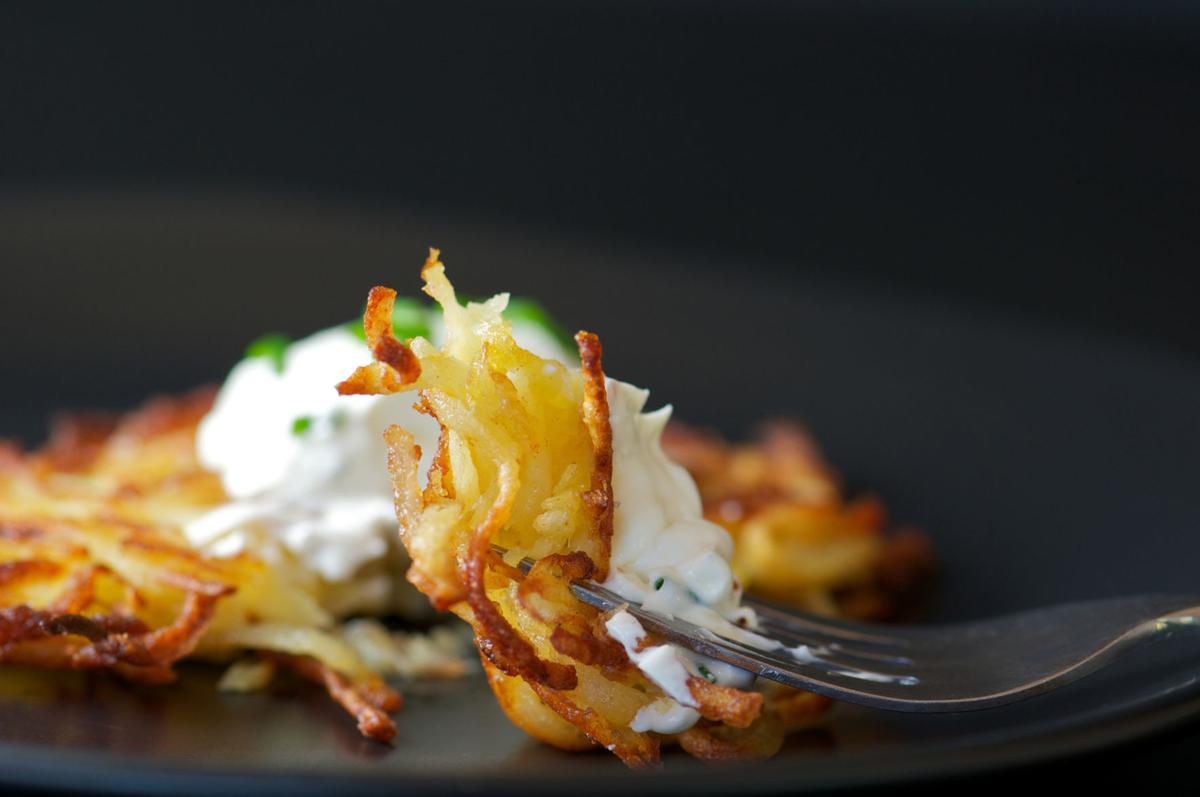 You say potato pancake, I say latke (LAT-kuh, not LAT-kee). But what are we really saying?

The names potato pancake and latke are often used interchangeably. They’re made from the same ingredients: potatoes, egg, flour, onion, salt. Both are peasant foods of Eastern European descent. The condiments are the same. But technique and tradition set them apart.

A latke is made with shredded, drained potatoes and must be fried in oil resulting in a tender center and crisped brown exterior with visible shreds creating lacy edges. Potato pancakes have smoother edges like a breakfast flapjack because they can be made with riced, finely shredded or mashed potatoes that tend to be bound together with more flour and egg than a latke. Rather than being fried, potato pancakes can be made on a griddle or even baked in the oven, resulting in a browned pancake that’s more uniformly cakey inside.

The latke’s origins are with the Ashkenazi Jews in Eastern Europe who had easy access to potatoes, a cheap and plentiful crop that was planted en mass during the mid-1800s following a series of crop failures in Poland and the Ukraine. Generations later, these spud fritters were made in the home kitchens of every Jewish family and became the poster child for the fried foods prepared during Hanukkah to commemorate the Maccabees’ miraculous menorah, which burned for eight nights on just enough oil to last one.

The general essence of a latke is pretty much the same no matter whose kitchen they come from. But like a Sunday sauce, a perfect pierogi or a cherished chocolate chip cookie, every family has their particulars when it comes to precisely how to make them.

Leah Yurka’s family latke recipe came from a blue book of recipes she says every Jewish family has some version of. Her family picks a night during Hanukkah when everyone is free and makes them together, then she’ll bring all of the ingredients over to her best friend’s house and prepare them fresh again on Christmas Day. While she says red or white potatoes can be used, how they’re prepared is key.

“The most important part of the recipe—and this is why people don’t like to make them from scratch—is grating the potatoes and onion on a box grater. Not the cheese side, the finer side that turns it into a pile of mush,” she says. “There should be no chunks of onion or potatoes.”

Yurka then drains the potato-onion pile using a colander, or by putting a lid over the bowl and tilting it into the sink to let the liquid drain out. Then she mixes in the egg and flour to create a thicker applesauce consistency; if it’s too thin, it’ll spread too much in the pan and burn, she says. Then she gets to frying them.

“Hanukkah is all about the oil; you have to use the oil,” she explains. “Canola works for us; olive oil does not work. Make them as big or as small as you want.”

The Yurka family keeps Kosher at home, so the latkes, with sour cream on the side, count as a dairy dish that’s served as the main course with meatless sides like tuna salad and egg salad.

At the Ortman family home in Buffalo, Mike Ortman makes latkes all year round, especially when his wife Holly isn’t home.

“It’s a dad dinner and we eat all the stuff we’re not supposed to,” he says. “The kids are at my elbows and love to help. They eat them at the counter as they come off the pan, too, because that’s when they’re best. Then we sit down to have the meat and veggie part of the meal.”

Orman’s family has German roots rather than Jewish, but his pan-fried potato product is unquestionably latke rather than pancake. His recipe is the result of years of trial and error trying to replicate the latkes his mom learned how to make from her mother-in-law and served as a whole meal for her family of five (though the constant frying of batches meant she never sat down herself). While his mom used Crisco for frying, Ortman’s latkes kept turning out too greasy so he reengineered an adapted method and came to favor very specific kitchen tools along the way.

Ortman favors white potatoes—not baking, not yellow—left unpeeled for a better grip while grating. He says the hand grater is key; he describes his as a square wire tennis racket, a replacement for a vintage estate-sale one he wore out. He squeezes the water out of fistfuls of grated potatoes over the sink, places the drained potatoes back into the rinsed bowl, then proceeds to have the kids mix the egg and eyeball amounts of flour in by hand until it reaches the consistency of a stiff oatmeal.

Although the grownup Ortmans like grated onion, the small ones do not, so they’re omitted from these latkes. Lemon-sized dollops are dropped into a stainless steel or cast-iron pan (not non-stick) of hot sunflower oil 1/8-inch deep, flattened with a spatula, left to brown then carefully flipped with the aid of a spoon. When finished, Ortman drains the latkes on a paper towel, seasons with salt and pepper and hands it off to whoever’s turn is next.

“The first few and last few aren’t perfect, but the middle ones are perfect,” he reports.

Nechama Okonov’s holiday latke recipe is from an old Jewish cookbook she says has been around for years and years. Her personal potato preference is Yukon gold for a creamy center and crisp edges. The Yukons also don’t turn color as quickly after being shredded, and even when they do, it’s not an unappetizing gray. She uses minimal flour so they latkes don’t turn out gummy; just enough to hold them together and let the potato flavor come through instead of the flour. Grated onion is a must-have in her house. When it comes to grating the potato and onion, Okonov breaks from old-world tradition.

“The controversial question is hand-grated or food processor,” she explains. “I use the shredding blade on a processor. Using regular food processor blade makes them get too flat. For people who don’t have a ton of time but still want to make them from scratch, here’s a hack: Buy frozen hash browns, defrost them and skip the whole peeling and shredding part; just get right into making the mix.”

Okonov also owns Buffalo Kosher Gourmet and is often tasked with making latkes for a crowd. She says the trick to lots of latkes is to do them in small batches.

“If you make a large batch, the batter collects water at the bottom of the bowl and they get soggy,” she says. “I do them in batches of six potatoes at a time. It’s a pain, but it keeps them crisp and preserves the color. I make them ahead and heat them up. Obviously, they’re the absolute best when they’re straight out of a frying pan, but for 50 people, you can’t do them all at once.”

No matter the procedure or potato preference, latke-making is often as much about the family tradition and the memories that come out of making them together.

Yurka says that one year while making latkes at a family friend’s house, the whole frying pan caught on fire (working with oil can do that, she says). Thankfully, the flare-up was quickly contained and neither the kitchen nor the cooks sustained any damage.

“Another time we had all the ingredients—except the oil,” Yurka remembers. “And that year Hanukkah was over Christmas, so most of the stores were closed. It was kind of like reenacting the Hanukkah miracle with the oil because I finally found one bottle in the back of my pantry that had just enough to make the latkes.”

As a child, Okonov says that when her family made holiday latkes, every member had a job to do.

“I grew up in a big family,” she says. “I’m the oldest of 16 kids, so it was always a huge project. We could never make them fast enough or make enough of them, because as you made them people were eating them. It was a big family project with everyone involved. The very young kids were peeling potatoes, the older kids were shredding them. My mother had a deep fryer and she stood at that.”

Finding latkes in Western New York isn’t easy. While potato pancakes, sometimes erroneously listed on menus as latkes, are staples at area Eastern European restaurants like Polish Villa 2, Ulrich’s Tavern, Slavic Bazzar and Schnitzel and Co., real latkes are harder to find. Few of the long-standing traditional Jewish delis remain in Buffalo, but there are at least two that make latkes only during Hanukkah: Risa’s Restaurant on Delaware Avenue in Buffalo, and the Meyers Family Tel Aviv Café at the Jewish Community Center in Amherst, which is run by Okonov, who also offers them on her Buffalo Kosher Gourmet menu all year round.

About the only surefire place in Buffalo to find latkes whenever the craving hits is exactly where they originated—in the kitchens of dear friends and family.

“The latke making will probably be at my grandmother’s house this year,” says Yurka. “She’s the one who taught us all to make them, and she’s 94. Once that smell starts in the kitchen, it feels like the holidays.”

Traditional toppings for latkes are a dollop of sour cream, applesauce or both. Sometimes a sprinkle of chopped scallion or chives. But Nechama Okonov of Buffalo Kosher Gourmet says she likes to have fun with the accoutrements. When she makes mini versions as an hors d’oeuvre for her catering clients, she sometimes sets up a latke bar with a variety of toppings for guests to choose from.

The culinary art and revival of butchery

I can vividly remember the scene of my first meat-ing: My 7-year-old self was begging my mom to help make my grandfather’s meatloaf recipe. At…

Beth Marks’ kitchen is not an overstated place.

Wine tasting with neighbors out in our lanai

While this is small potatoes compared to the many hardships people have suffered due to the pandemic, I have been challenged to do wine tastin…