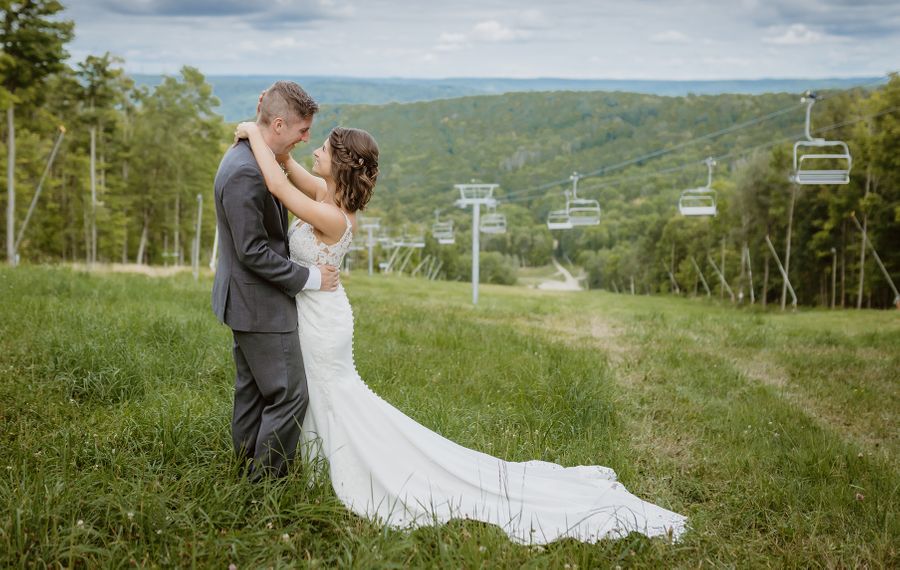 When Molly Eshbach and Spencer Timkey first met, skiing wasn’t just a hobby. It was their livelihood.

Working at one of his family businesses, The Boardroom Snowboard Shop on Main Street in Ellicottville, Spencer was unloading merchandise when Molly caught his eye as she headed to work at The City Garage, a ski shop that abutted the store.

Immediately captivated, he made a plan to stop by The City Garage later that day for post-work beverages with the staff. “My heart skipped a beat when she walked into the room,” Spencer fondly recalled.

That night, the two arranged their first date during the Ellicottville Fall Festival two weeks later. In the meantime, Molly, a child testing researcher at Fisher-Price, did a little suitor research—in her words, “creeping his Facebook.”

“I saw that he posted a picture with his parents so I figured he must be a nice guy,” said Molly. She immediately friend requested Spencer and e-flirtation ensued.

Their intense interest in each other was matched only by their shared passion for skiing (well technically, snowboarding for him). Both growing up in ski families, Spencer was born and raised in Ellicottville, while Molly’s parents owned a townhouse there and now live there full-time.

To pop the question, Spencer orchestrated a picnic hike at Holiday Valley with their beagle, Lincoln.

When they got to the top, overlooking Spruce Lake, Spencer reached into his backpack for a supposed dog treat and pulled out a ring instead.

Their wedding celebration would take them back to the mountain, exchanging vows at the top of Yodeler run, accessible only by chairlift—even for Spencer’s 94-year-old grandmother and the best man’s same-aged grandfather.

Sharing the last chair to go up with her parents, Molly remembered thinking, “It was so humbling watching each and every guest ride up on the chairlift, knowing they were all going up for us.”

Spencer, who was the first to go up and got to see everyone arrive, says, “I would live that day a thousand times.”

At the end of the ceremony, the couple rode in the lift’s golden chair to the base of the hill for their reception at Yodeler Lodge.

“We wanted the day to be super casual and reflect our personality,” said Spencer. “We’re very anti-cliché.”

The couple did finish the evening with one customary local wedding tradition, however: dancing on the bar at Madigan’s.

The invitation suite originally depicted two skiers on the chairlift, but Molly requested that a snowboarder be swapped in as a nod to her new husband’s preferred ride.

Classic white with hints of blush, all wedding florals were hand-picked from acres of fresh flowers.

Further evidence of the couple’s love of the slopes, a custom snowboard and set of skis, crafted by Lib Tech, flanked the gift table.

Designed to match the gold and brass tones of the table decor, a headpiece was chosen in lieu of a veil so as not to hide the show-stopping back of the gown.

Custom-built wooden doors added separation into the outdoor venue. For the big reveal, the sliding barn doors were opened for Molly to start her walk down the aisle.

A hexagonal arbor built by the groom’s father perfectly framed the couple and the spectacular mountain view.

The rustic elements of the charming Yodeler Lodge were beautifully balanced with elegant wedding decor and details like pillar candle centerpieces surrounded by brass vases and candle sticks of varying heights.

The cake topper by B in a Bonnet carried the chairlift motif to a new level.

A sprig of rosemary adorned every place setting and the color of the wax seal on the name cards coincided with the specific protein each guest chose for their entree.

Bucking the cake tradition, the couple’s dessert table consisted of a donut board, cupcakes, Rice Krispy treats and brownies. Rumor has it the dessert line was longer than the bar’s.