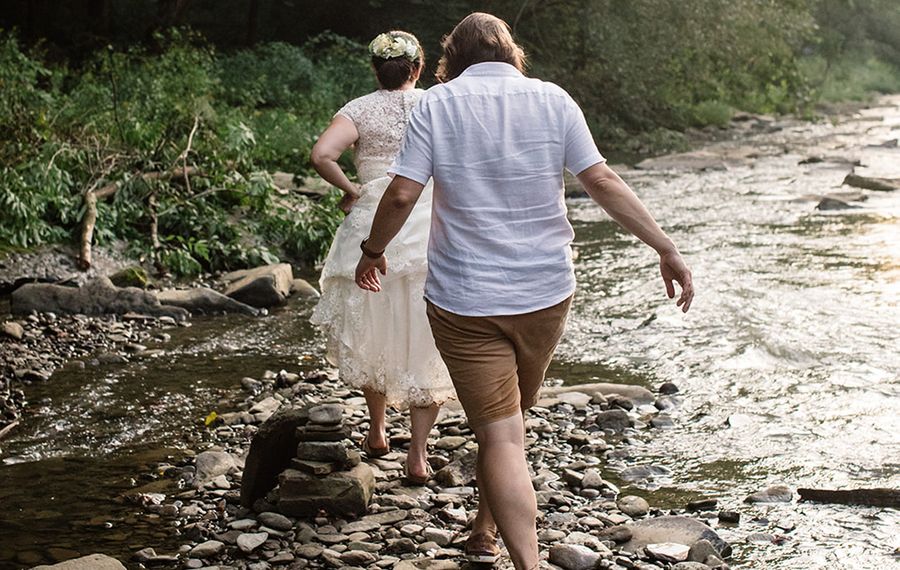 “Call me sometime if you want to go on an adventure.”

That simple phrase sparked Gretchen and Summer’s connection. And a three-year engagement meant time for the two to travel, build a cabin and play pinball.

The couple has explored extensively stateside and internationally in their time together, including Colorado, France and the Netherlands (not to mention a honeymoon to Iceland). Their shared fondness for pinball urged the two to seek out somewhere to play the arcade classic everywhere they’ve traveled.

Summer reawakened her childhood love of pinball when she joined a league with Buffalo Pinball in 2015. A year later, Gretchen did, too. Through tournaments, fundraisers and even museums, pinball has become a shared love and pastime.

“We were in Paris last year and the Paris Pinball Museum was scheduled to be closed. Gretchen emailed the owner and he opened it up just for us!” says Summer.

Engaged in March 2016, the couple, overwhelmed by plans of a wedding, decided to build a cabin instead. Their weekend hideout ended up becoming the natural choice to host their wedding—and Gretchen and Summer planned it to be one big camping experience.

Guests were encouraged to camp out, sleeping over the night before the ceremony as well as post-wedding. The three-day extravaganza was met with 80 campers and 200 guests in total. A gathering of tents, campers and sleeping bags, the campout was a success.

“Having so many people camp with us in one of our favorite places was really special,” says Summer.

The arbor, pulpit and many sign displays arranged throughout the property were made of sumac trees cut by Gretchen’s father. Florals provided by Kayla from Wildroot Florals adorned them. A personal friend, Rev. Geri Lyons, officiated.

Just before the ceremony, it rained—hard. In the midst of the downpour, Gretchen and Summer looked out and decided together they were getting married under that handcrafted arbor no matter what. Mid-ceremony, the sun finally came out. Everyone laughed about the shared experience of a midday rainstorm.

"I collected 365 rocks to symbolize every day in the year that I would wake up and choose to love Gretchen," says Summer. "We genuinely believe love isn't something that just happens but is a conscious choice."

Gretchen and Summer’s cabin on the creek, which took them a year to build starting in 2017, was a personal addition to their 14-acre family property. Two of the most thoughtful wedding gifts they received was a homemade birdhouse replica of the cabin and a painting of it.

Made of wood rounds, the guestbook now hangs in the couple’s cabin.