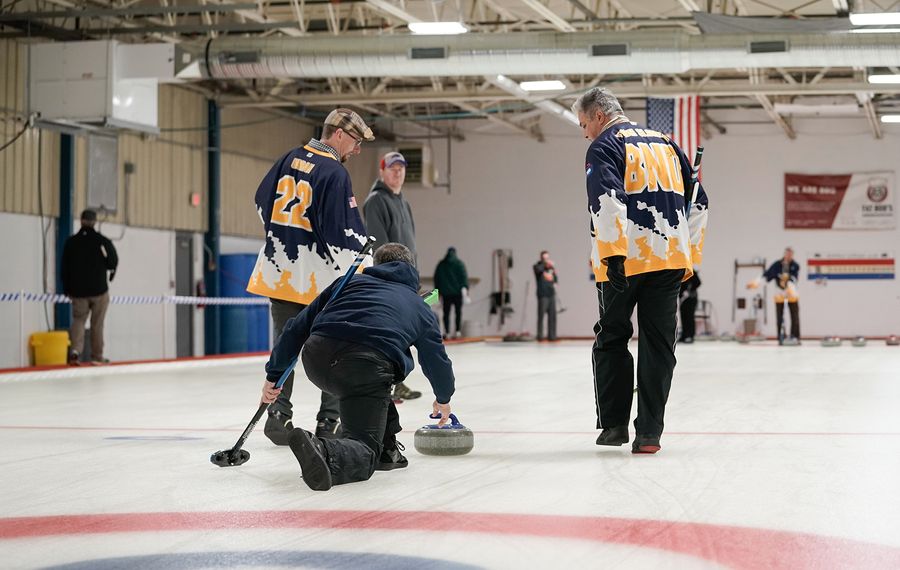 Hidden in an industrial park just off I-190 in South Buffalo is one of the more incongruous spaces you’ll find in the city.

Inside the old Buffalo China factory sit four gleaming sheets of perfectly manicured ice. But it’s not a hockey rink—it’s Buffalo’s only dedicated curling facility, home to the Buffalo Curling Club since they acquired the space in 2017. Through sweat and team effort, they transformed it from a disused shop floor to the combination curling rink and clubhouse it is today.

“It was full of stuff from the end of Buffalo China. Stuff was still in the kiln and all over the conveyor belts,” said Danielle Buchbinder, Buffalo Curling Club’s president. “It was all volunteer labor except for electric and HVAC work. They installed everything.”

The club started at Riverworks in 2014, but the outdoor environment was often proving too unpredictable to curl reliably in. So when they had the opportunity to move and create their own space, the membership of the club came together and got it done. That community ethos pervades the membership.

“We hang out here. We’re here early. We aren’t on the same team, but we’ve known each other for five years,” said Bob Pieper, one of the club’s original members. “There are lots of opportunities to get involved. The people are great and it’s a lot of fun.”

Members often arrive well before their league games to sit and socialize in the clubhouse and hang back for a post-match drink—paid for by the winners, according to custom. This comradery is an important part of the game, and even the newest members of the club already feel at home.

“It gives us something to do on a Wednesday night. Our kids are older, so we don’t have all the running around like we used to,” said Cheryl Jankowski, who joined with her husband just three weeks ago. “The folks we are curling with are good people.”

But the fun is not just for members. There are tons of ways to throw a couple of stones without fully committing. The club offers two different learn-to-curl class options: a two-hour and four-hour class ($30/$55) that teach the basics and let you play a few ends (a curling term with a meaning similar to an inning).

The club also offers ice rental during the day on weekdays as well as Friday, Saturday and Sundays around their league schedule ($200/2 hours). A rental is perfect for a group of roughly eight and are extremely popular: Expect most weekend times to be booked in the winter months.

If you end up catching the curling bug, there are beginners’ leagues to bridge the gap between the first learn-to-curl class and a full-fledged league.

The club itself is a team effort, but the genesis comes from Buchbinder. She first got interested in the sport as a kid watching the game on Canadian TV while growing up on the East Side of Buffalo. And that interest grew in the early 2000s when she started making trips to the Niagara Falls Curling Club in Ontario, first as a team-building exercise at work, then as a member of the club.

She planted the seeds of a Buffalo-based club in 2007 when changes at the border made a passport mandatory.

“I was on the board of the Niagara Falls Curling Club at the time and we didn’t see a drop in membership, but we did see a drop in rentals coming over from the United States,” she said. “I saw that as an opportunity, but at the time we called around to all of the rinks and no one could give us the ice time we needed. But I like to talk a lot, so I kept talking and talking and talking about this until the right person listened.”

That right person turned out to be a fellow club member in Niagara Falls who told Buchbinder about the building of Riverworks. He set up a meeting, and finally the club acquired its essential ice time.

“We were really blessed that it happened because without that we would not exist,” Buchbinder said.

Two teams of four people each take turns throwing a 44-pound stone, also known as a rock, down a sheet of ice towards a target painted on the ice.

The target (called the house) is a 12-foot circle, painted like a bulls-eye just under 150 feet away.

Each team throws eight rocks, with each team member throwing two in a row. At the end of the throws, the team with the rock closest to the center of the house scores a point.

Just like in bocce ball, you can keep scoring points if more than one of the rocks for your team is closer than any of the opponent’s rocks.

Each set of eight stones is called an end. There are a predetermined number of ends in a game, usually between six and 10.

The team with the most points after the last end wins.

If you’ve ever seen the game on TV, you know it’s not quite that simple. The three other teammates all have brooms and can sweep the ice ahead of the stone—an action that melts some of the ice, reducing the friction, which can affect both the speed and location of a stone.