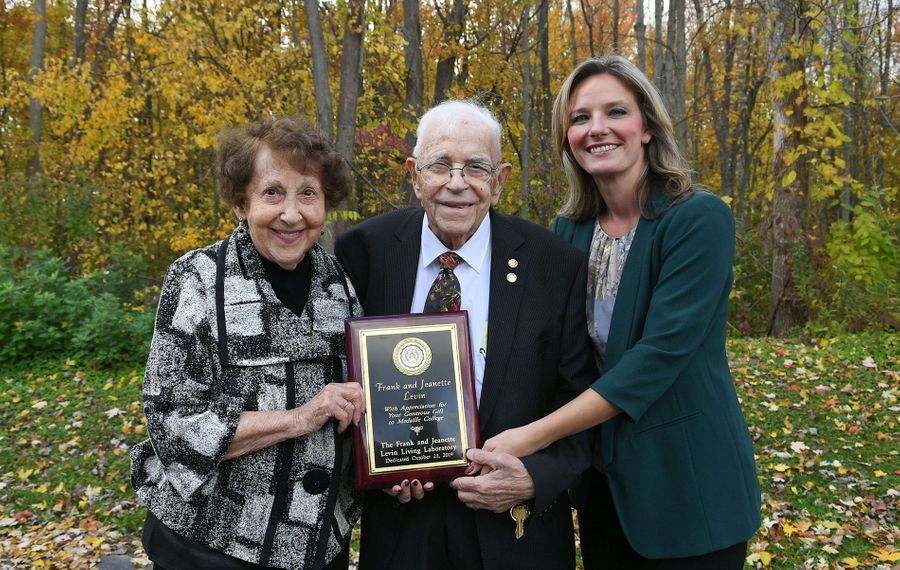 It was nothing short of serendipity that lead an Amherst couple on a mission of environmental stewardship to recently donate 10 acres of private wetlands to Medaille College. The property, located along Millersport Highway about 25 minutes away from the school, was gifted by Frank and Jeanette Levin and is now a living laboratory for Medaille’s biology department.

“I did this wetlands blurb on the news and somebody saw it,” recounts Bernadette Clabeaux, assistant professor of biology at Medaille College. “They were in the middle of trying to figure out how to connect the Levins to a college, so that person reached out. We’re just so happy the Levins went forward with it.”

That person was Bob Strell, who has been a friend and real estate consultant to the Levins for 30 years. Strell had been helping them look for the right fit for the wetland property.

“One morning two years ago at about 6 a.m., there’s Bernie on TV and I put my coffee down, looked her email up and sent her an email,” Strell said. “Within about seven minutes, I had a four-page letter from her.”

This isn’t the first time the Levins have been actively involved in environmental stewardship. In 1993, Frank helped save Strawberry Island on the Niagara River.

“We have always been environmental conservationists,” Frank said. “Our goal is to preserve the land, keep the water clean and certainly preserve the trees which are so important in all our lives. I’m 93 years old, and we’re interested in the future generations.”

The donated property, which was part of a larger parcel the Levins purchased in 1996, has always been pure, vacant wetlands. Land nearby was developed into an apartment complex, but the 10 acres Medaille now possessed have never been developed—and may never be developed—according to guidelines from the Department of Environmental Conservation. Wetlands are areas saturated by surface or ground water sufficient to support distinctive vegetation adapted for life in saturated soil conditions, according to the New York State Department of Environmental Conservation.

“It’s going to be great in the future,” Clabeaux said. “We’ll collect data long-term and look at how the land is changing over time. The property has a couple of different ecosystems that our students can investigate. It’s a peaceful, beautiful area.”

Clabeaux said students have already begun their research work in the Levin Living Laboratory, as it was fondly named, and called the donation a “huge asset” to Medaille’s biology program.

On one of the first visits to the site, two great blue herons were spotted, which led the group to wonder if the birds were perhaps nesting in the wetlands. That became the focus of one student’s independent study project. Other students will be testing the water quality and seeing what grows in the wake of dying ash trees—and all projects will give the Medaille biology department an idea of the property’s composition and how it changes.

“These projects will lead into one continuous story over time,” Clabeaux said.

The donation of the wetlands provides other numerous opportunities, including the chance for Medaille to get more involved in the community by promoting environmental awareness and educational outreach, as well as giving biology students hands-on experience.

“This has opened up opportunities that wouldn’t have existed otherwise,” she said. “We can get out of the traditional classroom setting and get students field experience. Hopefully this will lead to opportunities and connections not just for their education, but eventual careers. We’re getting them trained to save this world we’ve done some damage to.”

Jeanette said the experience has been wonderful, including a luncheon that was recently held to celebrate the donation.

“The students, they got up and talked about what they want to do with their future, and everyone just hung on every word,” she said. “We’ve had people say, ‘Why are you bothering with this?’ Well, it’s the future.”

“We wanted to be assured it would remain forever green,” Frank said. “Wetlands are a very important aspect in everyone’s life.”

While much is left to learn about the 10 acres of private wetlands donated by the Levin family to the Medaille College biology department, there have already been plenty of discoveries, including: