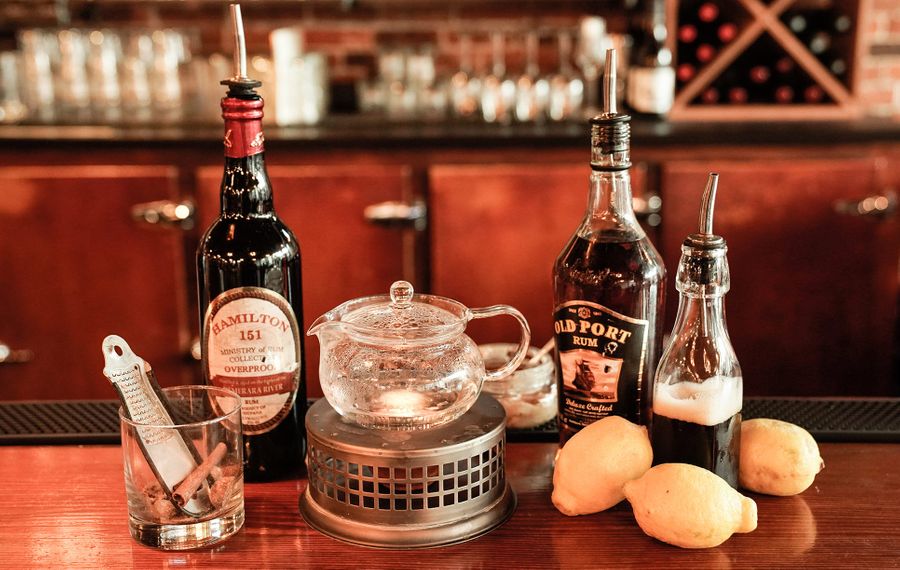 The necessity of a hot cocktail really can’t be overstated in Buffalo. When snow starts to pile in streets, we’re left with no choice but to venture by foot to the neighborhood bar for a drink that warms from the inside out.

The traditional hot toddy is whiskey or bourbon mixed with hot water, honey and spices. Our neighbors to the North have even been known to add maple syrup. The best news? A hot toddy is considered helpful in relieving the symptoms of a cold.

Lockhouse Distillery | Buffalo
It’s a toddy with a twist. Called Fire & Spice, this cocktail still uses bourbon, but the main spirit is Lockhouse Ginnamon (a cinnamon flavored gin) with Pierre Ferrand Dry Orange Curaçao, fresh lemon juice and hot water. If you like your drinks a bit sweeter, they’ll happily add in some of their house-made honey syrup, just ask! The cocktail is garnished with a flamed cinnamon stick and a lemon twist.

At Alchemy in Hamburg, apple cider is added to Cabernet Sauvignon for their mulled red wine.

A popular drink in many countries during Christmastime, mulled wine is served warm and consists mainly of red wine and spices. It may also be referred to as glowing wine, boiled wine, cooked wine, bishop’s wine or burnt wine.

Not to be confused with the five-piece bluegrass string band out of San Francisco, this is a cocktail that, perhaps obviously, includes rum, butter, spices and hot water.

Hydraulic Hearth | Buffalo
Each drink is made to order in a little glass teapot and never batched. I’m told it’s the only way to ensure the drink will be truly hot. Plus, the bar can then accommodate exceptions that way. The Larkinville mainstay also hosts a Bavarian Winterfest at the end of January, where traditional German hot cocktails are served outside—no matter the weather!

Lilly Belle Mead | Lancaster
Not exactly a hot buttered rum, but close. The Vicki is a creamy vanilla drink infused with a bochet mead (alcohol made by fermenting honey) that tastes like a decadent, sweet bourbon.

Cup of Joe meet Cup of Jack—or Kahlúa or Frangelico.

The French Pub | Depew
Brewed with their own secret blend of coffee, the French Pub Coffee features Kahlúa, Baileys Irish Cream and Grand Marnier topped with whipped cream and a cinnamon-sugar rim.

The Chocolate Bar | Buffalo
In addition to the traditional recipe, the Chocolate Bar also offers the Nutty Irishmen with Frangelico, Baileys and Jameson, and the Kentucky Coffee with Kentucky bourbon, Wild Turkey and honey, among many, many other options.

No elaborate origin story here. Sometimes you just need a little something extra in your hot cocoa.

You may remember it from National Lampoon’s Christmas vacation, but eggnog was included in “The Modern Bartender’s Guide” as early as 1878. Not ideal for the lactose-intolerant, the dairy-based drink is traditionally made with milk, cream, sugar, whipped egg whites, egg yolks and a splash of your distilled spirit of choice.

Marble + Rye | Buffalo
Bartender Megan created “The Meg Nog,” but the recipe is kept under tight lock and key. I’m told it’s made from scratch using local cream, milk, eggs and a house blend of aged rums, Amaro liqueur and topped with nutmeg. The meringue is made nightly and folded into the nog behind the bar. This special secret cocktail is offered through December, but there’s a limited supply each night.

Speaking of eggnog, a close relative is the Tom & Jerry, which adds brandy and rum and is typically served in a kitschy miniature mug. It was invented in the 1820s by British journalist Pierce Eagan to promote his stage play, “Tom and Jerry, or Life in London.” Which means it sadly has nothing to do with a certain cat and mouse duo of the same name.

This cocktail has been widely embraced locally with countless bars offering their unique take, including:

The Place | Buffalo
You get to keep the mug!

Cole’s | Buffalo
You’ll already be there trying the hot toddy!

McPartlan’s | Cheektowaga
Enjoy before or after their fish fry, but never with.

Boomerang’s | Buffalo
You’ll recognize the recipe, shared by The Place.

Lilly Belle Mead | Lancaster
If you’ve circled the wagons on more traditional takes, this mead version may spice things up.

Stock your bar with spirit

If you’d prefer to cozy up for a night in instead, ready your home bar with these seasonal garnishes to help elevate any drink.

Rosemary and thyme
A sprig of rosemary or thyme is the perfect finish for tart drinks. You can also string cranberries on the ends of the branch for a double-duty garnish.

Bartender bonus: “I’m a big fan of using herbs as garnishes and during the holiday season, I most often end up using rosemary or thyme. Burning them, just enough to smoke a bit, creates a great aroma and can really help give your drink that extra festive touch it needs,” noted Alyssa George, beverage coordinator at Lockhouse Distillery.

Candy cane
‘Tis the season for peppermint! You can use a candy cane as a stirrer or crush it up and dampen your rim with melted chocolate and apply the crushed pieces for a minty tingle with every sip.

Sugar cookies
Santa was onto something. Try it alongside a boozy beverage, too.

Cinnamon stick
Perfect for a warm cider or hot toddy.

And when in doubt, spice it up…
Bartender bonus: “As far spirits go, my go-tos are St. Elizabeth Allspice Dram and of course, Lockhouse Ginnamon. Negronis are a favorite of mine and are also simple to make. Adding as little as a barspoon (1/8 oz.) of either spirits gives the perfect holiday flavor,” added George.