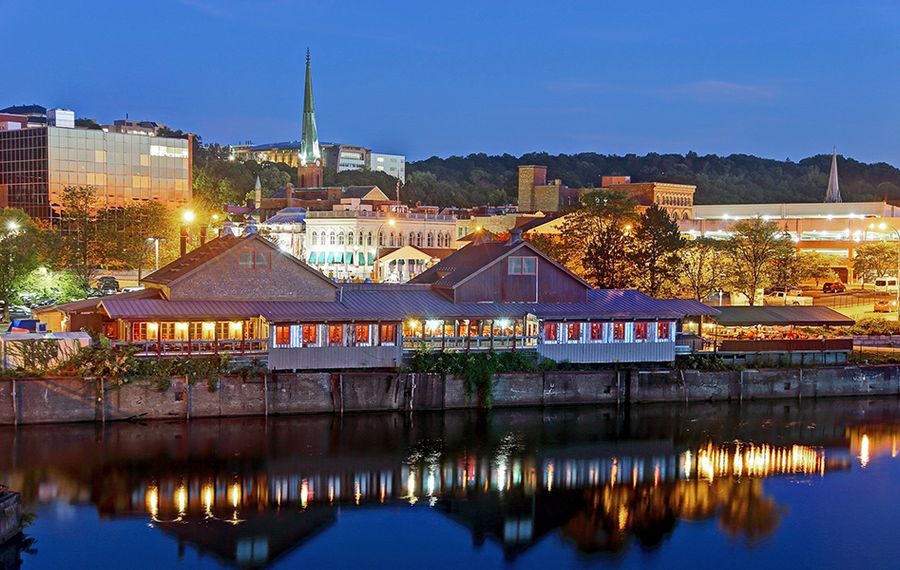 Take I-90 east and you’ll be in this Capital District city of 50,000 people in just under four-and-a-half hours.

While this tri-college town provides all the reason you need to head east, it’s sometimes overshadowed by its neighbors: bustling Albany and upscale Saratoga Springs. That’s a shame because Troy’s architecture, history, food, art and music scenes—coupled with its waterfront diversions—warrant multiple visits. It has year-round appeal and shouldn’t be overlooked in late fall because of its huge Christmas Craft & Holiday Market Nov. 22-24 at Hudson Valley Community College and the 37th annual Troy Victorian Stroll Dec. 8.

The new Courtyard by Marriott offers Hudson River views, convenience and comfort as a prime example of a local commitment to using Troy’s natural assets to the max. Nearby, check out the 100-year seawall, which is undergoing a $26.3 million repair and stabilization project, expected to be completed in December. As a federal and local investment in the city’s future, there’s every reason to be excited about what lies ahead.

The Olde Judge Mansion is a working-class-neighborhood B&B with five guest rooms. Spending a night or two in this relaxing Victorian Gothic home (with phenomenal woodwork!) seems the perfect way to get a feel for the city’s history. Because of its role in the Industrial Revolution, Troy ranked fourth among the wealthiest U.S. cities at the turn of the 20th century.

Manory's Restaurant has a breakfast spread that everyone will love.

Manory’s Restaurant is the city’s oldest restaurant, and the menu is loaded with variety that folks rave about. In a nod to autumn, you have to try the pumpkin milkshake. (Not your thing? How about Fruity Pebbles, brown sugar poptart, or chocolate-covered strawberry milkshakes?)

Beirut Restaurant offers award-winning Middle Eastern fare that’s near and dear to my heart, having grown up in a Lebanese Catholic church. Bring on the kibbeh, stuffed grape leaves and baba ghannouj! In the mood for another cuisine? Downtown Troy is home to Moroccan, Italian, Greek, Indian, Polish, Mexican and myriad Asian eateries.

For one-stop variety and a sense of community, look no further than the Troy Kitchen or the new River Street Market. The Kitchen hits all the right notes as a fun place to hang out and try something new from its five vendors. RSM is a food hall in the waterfront’s Hedley Park Place professional building (also home to Troy City Hall). It’s the largest venue of its kind in the Capital District, and among its more mouth-watering menu items are the “Sammiches” at Papa’s Best Batch.

The Rice Building is a Moorish/Victorian structure located at First and River streets.

Browse a double-whammy of a craft fair Nov. 22-24 when the Country Folk Art Craft Show and the Christmas Craft & Holiday Market set up shop at Hudson Valley Community College. Poke through the work of scores of juried artisans selling everything from furniture and framed artwork to jewelry, quilts, metalwork, soaps and more. Why not get a jump start on Christmas shopping—or pick out some special items for yourself?

The 37th annual Troy Victorian Stroll runs from 11 a.m. to 5 p.m. Dec. 8 with hundreds of free attractions, including musical, dance, magic and storytelling performances. Carriage rides, food and an arts and crafts show are all part of the festivities, and there’s plenty of shopping to be done along the historic streets. As you enjoy the stroll, don’t forget to look up! You don’t want to miss the impressive architecture. A personal favorite: The triangular Rice Building at First and River streets. The Moorish/Victorian structure built in 1872 was nearly demolished, but about 20 years ago, preservation-minded organizations prevailed, and much of its original beauty was restored.

Carve out time to visit St. Joseph’s Roman Catholic Church. It’s home to 42 Louis Comfort Tiffany windows, believed to be the most in any building in the world.