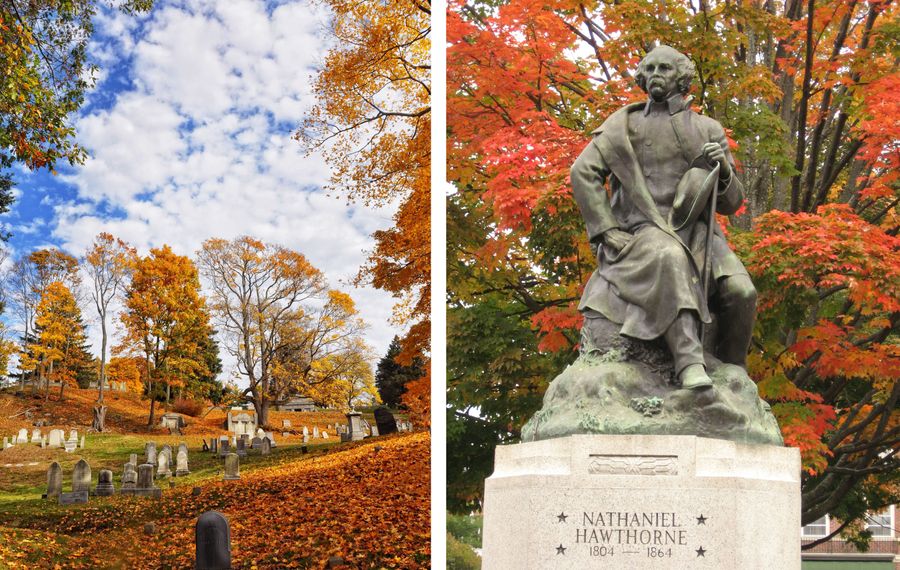 Located just off the I-90 north of Boston, it’s an easy seven- to eight-hour drive (depending on traffic on the Massachusetts stretch).

Set along the north coast of Massachusetts, Salem is full of history and year-round interest—but especially in the fall when the whole city turns into a Halloween destination. The city’s Haunted Happenings Festival takes place throughout the month of October, filling the streets with creepy characters, haunted houses and psychics to celebrate its spooky past.

The city dates back to the early 1600s when Roger Conant founded Salem along with immigrants from nearby Cape Ann—and, of course, is most well-known for the Salem Witch Trials that took place in the 1690s, where they accused targeted locals of practicing witchcraft.

Between its infamous history and modern-day draws, Salem is a destination you don’t want to put on the back burner.

The Hawthorne Hotel is a short walk from the Salem Common. Hotel visitors swear they’ve seen the spirit of a woman strolling around the corridors—and guests that sleep in room 325 have reported hearing children’s cries and the feeling of being touched. (Consider yourself warned!)

The Merchant is a beautiful boutique hotel tucked inside an 18th-century mansion. It’s walking distance from museums and the train station and features tastefully bold interiors and modern amenities like Wi-Fi, charging docks and smart TVs.

Sea Level Oyster Bar is the perfect place to stop for craft cocktails, delicious desserts and plenty of fresh seafood. They have fresh, briny oysters, lobster rolls and seafood platters that mix and match shrimp, littleneck clams, oysters and lobster.

Witch’s Brew Café’s apt name originally grabbed my attention, but the food is worth a mention in its own right. They serve up hot and crispy scallops, clam chowder, cheesy French onion soup and so much more. Cozy up inside with a beer and some warm bar food.

Walk Essex and Derby streets to explore all the different and unique shops like Crow Haven Corner, which is actually Salem’s oldest witch shop (125 Essex St.). Wynott’s Wands will make you feel like you’re inside a Harry Potter book (127 Essex St.) and you can even visit America’s oldest candy company, Ye Olde Pepper Companie (122 Derby St), for some taffy, fudge or old-fashioned sweets.

The Haunted Happenings Festival kicks off with the Haunted Happenings Grand Parade on October 3, featuring local students and business owners. The festival packs everything from psychic readings and haunted houses to film festivals, ghost tours and more. Festivalgoers dress in costume and really play the part, so don’t be surprised if you look over your shoulder to see Michael Myers slowly walking towards you.

Visit the Hocus Pocus House. The classic Halloween favorite was filmed in town, so you can actually see Max Dennison’s house from the movie located at 4 Ocean Ave.

The Witch House, the famous home of Jonathan Corwin, a judge during the trials, is the only structure that has stood the test of time since the Salem Witch Trials in 1692.

Get a reading from a local psychic. During the month of October, they’re everywhere setting up pop-up shops in stores along Essex Street. You can receive a reading at the psychic fair or tarot card readings at studios like Enchanted near the boat harbor (98 Wharf St). They can be pretty spot on and it’s fun to see what they think your future holds.

The Salem Witch Museum in Washington Square is one of the most popular museums in the area—and a must for any visit.