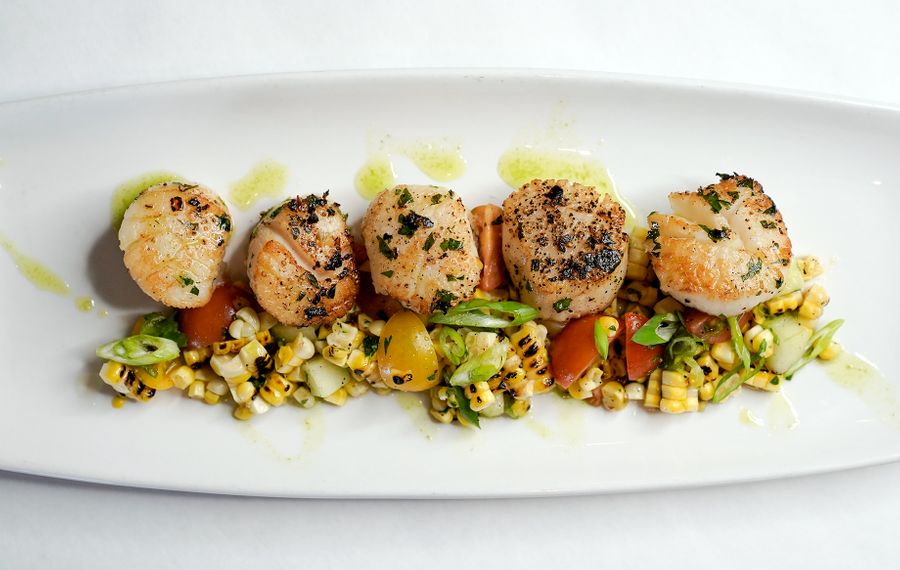 Buffalo summers are about taking everything we enjoy—like dining, drinks and music—outside. This applies to the city proper as well as surrounding suburbs and areas just a short drive away.

One of the trips can take you to the always quaint and, dependent on the entertainment, cacophonous corner of the Town of Lewiston.

With just a short cruise up the 190, interested parties can enjoy dining off one of America’s most powerful waterways and sidewalk cocktails along an idyllic town center stretch. Sandwiched in-between awaits a performance of one of music’s most iconic pieces of recording art—led by the same genius who manically conceived the work in a California recording studio more than 50 years ago. Get in the car, get outside and get busy enjoying these three stops on your next night out.

Whether five or 45 minutes away, it’s easy to forget how serene an experience it can be to dine aside the mighty run of the Niagara River.

But when summer hits and the weather’s conducive, there’s no more sublime spot along the expanse than the Water Street Grill. Set off the river’s edge, the locale hosts spots in its sidebar, dining room or spread around its patio that sits pristinely along the waterfront to provide a stunning backdrop for both casual conversation and the night’s dining direction.

And good luck making that choice. The seafood-highlighted menu provides options like Korean BBQ ribs ($12) or blistered sishito peppers ($9) for an appetizer, and pan-seared scallops or salmon ($23) for dinner. Those who’d rather eschew these scenery-appropriate selections for the beef of burgers (jalapeno bacon jam, $16) or a steak (ribeye, $28) will find options to enjoy, too, all before transitioning to the night’s main event off Niagara Gorge.

When The Beach Boys released “Pet Sounds” in 1966, it was not only considered a departure from band’s popular brand of songs about sand, surfboards and all the California imagery that went with their name. It was a critical and commercial dud, confusing to both pop journalists and fans alike.

Decades later, the album’s considered a revolutionary classic, responsible for motivating The Beatles to create its masterpiece “Sgt. Pepper’s Lonely Hearts Club Band,” and illuminating the brilliance of Beach Boys’ frontman, Brian Wilson—who conceived the work almost entirely independently from the rest of the band. For the last two years, Wilson’s been touring performance of the masterwork from front to back. This summer, he’s bringing the show to Artpark’s Mainstage Theater on Saturday, June 15, starting at 8 p.m.

Together with former bandmates Al Jardine and Blondie Chaplin, Wilson will pull fans back to the marathon studio sessions that created such masterworks as album opener “Wouldn’t It Be Nice,” the carnival whimsy of ‘Sloop John B” and the thundering percussion of “I’m Waiting for the Day.”

And for one night, listeners can get another chance to enjoy the songs that, at one time, were somehow considered underwhelming in the band’s canon of sunny surf pop.

After Wilson and Co. pick the final note of “Caroline, No,” you and your party will likely want to stroll up to Center Street and discuss the specifics of the show over a few cocktails.

The centrally located Cask + Cow has you covered. With a warm tavern atmosphere to accommodate a change of scenery from Artpark’s amphitheater vibe—or sidewalk patio seating to keep your outdoor experience intact—it’s an ideal spot to settle in, discuss the narrow-minded arrogance of mid-’60s rock critics, and wait for the exiting traffic down Center to die down.

And whether you’re in the mood for a glass of wine, creative cocktail or craft beer, the Cask (opened in 2017) can oblige. Pinot noir from the likes of Lyric does just fine with “Pet Sounds” banter and calming breezes off the Niagara River, as does the taste of a ’67 Shelby ($6.50), made with Deep Eddy vodka, cucumber bitters and a mélange of soda, cranberry juice and lemonade.