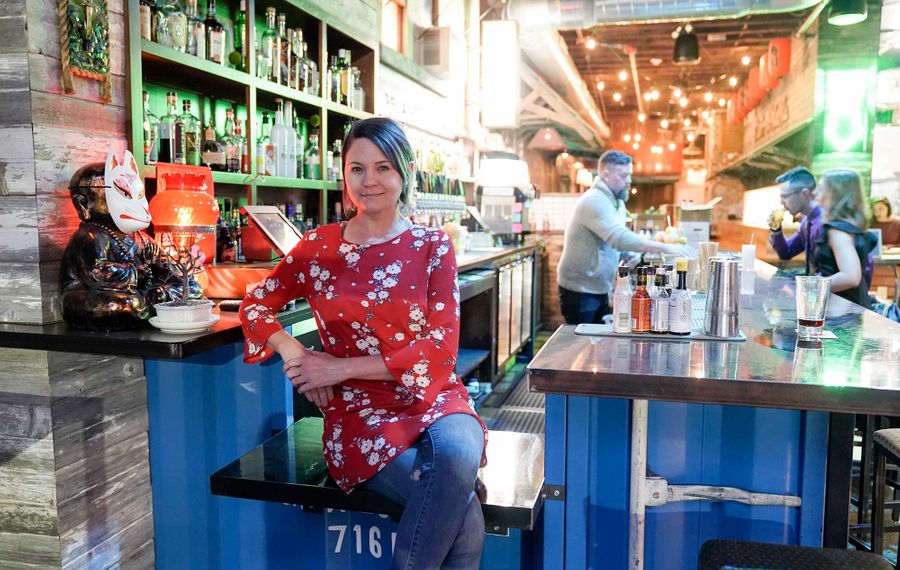 Christi Allen dreams on a grand scale. As a teenager in Los Angeles, acting on shows like “Married with Children” and “Santa Barbara,” she was inspired to tell her own stories through filmmaking, so she eventually moved behind the camera as a producer and launched her own production company.

Fast forward to today, and Allen’s latest big idea is lighting up the downtown Buffalo restaurant scene—and your Instagram feed. Along with her business and life partner Johnny Chow, Allen co-owns Misuta Chow’s, a glittering ode to Japanese culture and all things ’80s.

“With everything going on in the city, and with my background, skill set and ambition, I felt like I could really be part of this resurgence and bring something next level, cutting edge and different that Buffalo’s ready for,” said Allen, who moved here nearly a decade ago with Chow, a Buffalo native, and their now-13-year-old son.

When you enter Misuta Chow’s from Main Street, you’re immediately transported to a cramped alleyway, or yokocho, in Tokyo, with several building facades, an open kitchen, a working phone booth and cheery blossoms providing a warm, outdoor feeling in the dining space, even if temperatures dip to freezing outside. The menu emphasizes Japanese street food and shared plates, while the bar offers an extensive craft cocktail list and 15 craft beers and Brooklyn Kura sake on tap.

“Everything (in Japanese culture) is all about serving one another,” Allen said. “With sharing a sake—you’re pouring for me, I’m pouring for you. It’s so communal, and in the service industry, that concept and that culture made sense to us.”

To get upstairs, take the pink Hello Kitty-inspired staircase to the neon-emblazoned second floor, where the 1980s reign. Grab a drink at the bar, decked out in comic strips and a Vans checkerboard pattern, but don’t sit long—there’s a vintage arcade to enjoy (more on that to the left).

“The ’80s were awesome. Madonna, George Michael, Michael Jackson, Whitney Houston—all of it is totally Johnny and I,” said Allen, who teased the addition of more decor “moments” in the months to come. “This is the spot to have some awesome cocktails, interesting food and a different palate you may not be used to, and play some old-school, classic Skee-Ball—the 13-foot lanes—and feel like you’re back in the day.”

Welling with emotion, Allen expressed gratitude that Buffalonians fully embraced their concept, even before Misuta Chow’s July opening. Since then, they’ve expanded to a full menu at lunch and dinner daily, with brunch in the works. Also coming soon, Allen and the team are planning lunchtime delivery service to downtown workers, and collaborating with Lockhouse Distillery and Community Beer Works on a shōchū and matcha IPA, respectively.

As for her creative pursuits, Allen was a producer on “The Romans,” a modern-day take on Julius Caesar that filmed locally in 2013, and hopes to get back into filmmaking this year with her vision, as grand as ever, for an anthology series called “If.”

No self-respecting arcade would be complete without pinball—a retro game that’s been making a big comeback.

Five years ago, when several hobbyists formed Buffalo Pinball, “there were some pinball machines in a broken-down laundromat or one or two in a corner of a bar, and that was really it,” said Kevin Manne, a founding member. Now, games are popping up in local hot spots—including Misuta Chow’s, Thin Man Brewery and Resurgence Brewing Company—faster than a silver pinball can zip around the playfield.

“I think it’s the physical interaction,” Manne said of why the pinball scene has grown so much. “We come to work and sit in front of our computers all day, and we have our phones, but you can go and play a pinball machine and it’s a real thing. You’re interacting with real physics. And, it’s a great social thing to do too.”

The pinball scene has grown large enough to support multiple leagues around town. Misuta Chow’s offers two leagues, one hosted by Buffalo Pinball and another by Buffalo Women’s Pinball, an offshoot of the original group. Both are casual, open to experienced pinball wizards and first-timers alike.

“One of the coolest things about pinball is every game is different,” Manne said. “When you step up to a game, there’s a little different challenge. Even if it’s a game you know, there are physical differences (between machines) because they’re never manufactured the same, so there’s always something new to learn.”