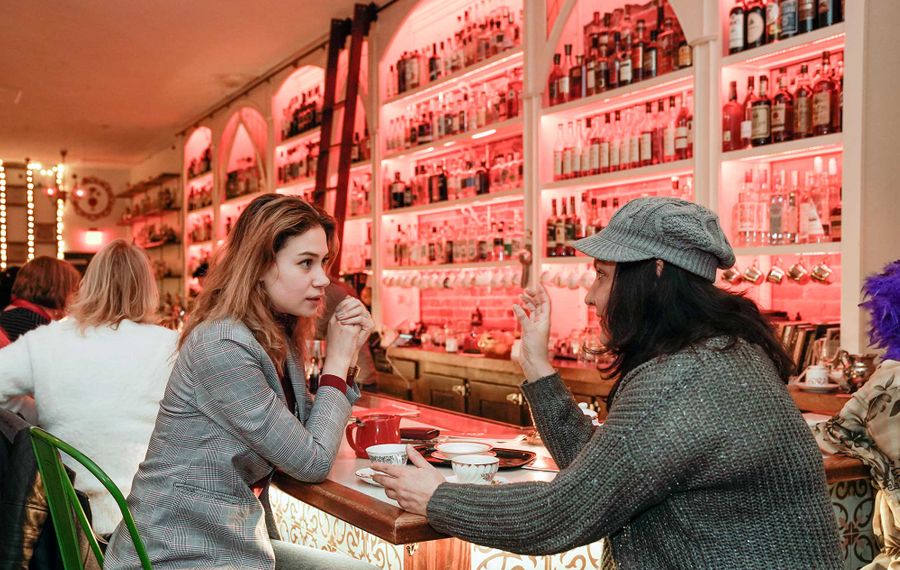 When my editor asked me to write about afternoon tea in Western New York—the British-pedigreed sort taken leisurely between lunch and dinner with a light repast of sandwich points and dainty sweets—I was a little hesitant.

“Why is afternoon tea worth experiencing?” she posed, among other article-framing questions.

Honestly, I didn’t have the foggiest.

I suppose my then-inability to appreciate tea’s merits resided in my discomfort with the gendered pageantry of it all. In our modern American coffee-crazed culture, the ritual of afternoon tea is not something we practice with authenticity. Largely, it’s an affect—something we appropriate from our seemingly more refined cousins overseas for special occasions, particularly those that glorify the prescriptive duties of conventional womanhood: bridal and baby showers, Mother’s Day and televised royal weddings. Afternoon tea, in this country, is deeply feminized and largely a woman’s domain.

Not only is afternoon tea a woman’s domain, it’s at times a caricature of womanhood itself. Like some sort of waspy, prudish drag show, the trappings and frippery of an archetypical afternoon tea experience exaggerate twee domesticity and feminine stereotypes. Chintz and lace, fine china, choregraphed service, diminutive foods, fanciful headwear, pink roses, saccharine conversation, it’s as if afternoon tea is asking us to play at womanhood—a little girl’s make-believe vignette all grown up.

But the story of tea and women, and the political implications of that relationship, are far more complex than appearances suggest. Tea, it turns out, has deep feminist roots.

At White Linen in North Tonawanda, afternoon tea is served on fine china and three-tiered stands are lined with house favorites including fresh-baked scones and cucumber sandwiches.

In the early 20th century, a tea room phenomenon swept the United States. Tea rooms (or tea houses, as they were also known) opened up by the thousands in cities, suburbs and rural communities countrywide. The small dineries, characterized by their intimate atmospheres, home-like interiors and daily lunch and afternoon tea service, were owned and operated, by and large, by women.

That might not seem remarkable or particularly surprising. But consider that the movement unfolded in an age when middle- and upper-class women’s opportunities for jobs outside the home were practically nonexistent and pursuing professional work, let alone running a business, was at dramatic odds to rules of “respectable” womanhood.

For women with entrepreneurial ambitions, the tea room model offered an attractive workaround to social conventions that relegated them to the home. It was because of tea’s associations with femininity and domesticity that women could open businesses. As long as they looked, felt and operated like extensions of their private kitchens and dining rooms, albeit money-making ones, they could do so without censure.

Tea rooms were also thought to serve the greater good by providing customers, male and female, a home-away-from-home refuge from the “depravities” thought to lurk in the bawdy, masculine restaurants and taverns of the era. That afforded women’s tea room ventures additional reputability. In effect, tea rooms occupied a morally justified liminal space between the domestic and public spheres. Women cunningly navigated that space to carve out some measure of financial autonomy without offending the sensibilities of society. She could own a tea room and exercise independence without sacrificing her reputation and without being disparagingly labeled a feminist.

Fast forward a century, and you can find tea rooms in Western New York that owe their concept, if not their direct lineage, to those 20th century vanguards.

At White Linen Tea House in North Tonawanda, owner Linda Kloch operates very much in the American tea room tradition. Located on a rural stretch of road in a stately pale-yellow farmhouse with a romantic wraparound porch, White Linen does not just give the impression of hominess, it is Kloch’s home. From her upstairs apartment, she can keep a watchful eye on the business she started, while employee Tracy Bauch manages the kitchen and general day-to-day according to the timeless ethos that guests should be treated like family.

And they are. Save for the modern, open kitchen that first greets you, walking into White Linen is like entering an elderly relative’s neat and tidy, time-warped domicile. A long-time collector of antiques, Kloch has appointed the sunny, atmospheric first floor dining areas with elegantly old-fashioned furnishings, chandeliers and wall decor reminiscent of a Victorian parlor.

Guests there take tea from cloth-covered tables set with pretty porcelain plates, saucers and cups. It’s a gracious, unhurried experience that compels one to linger over the quietude of the ritual, which starts with your choice of loose leaf or bagged teas, served to you in your own individual pot. For requisite nourishment, White Linen serves a signature garden salad with raspberry vinaigrette and a three-tier display of homemade scones warm from the oven, four kinds of finger sandwiches and five assorted bite-size desserts, plus ginger Devonshire cream, soft butter and fruit jam. Like tea rooms of yore, guests can also choose from an a la carte lunch menu of cozy, home-cooked staples like chicken a la king.

At Angelica Tea Room in Buffalo—known for its pink-lit back bar and vibrant interior that straddles the precipice of elegant and edgy—another well-established tea house practice is nightly underway: alcohol consumption.

Here, the cocktail program takes precedence over afternoon tea service, which is currently only available for private events, but that doesn’t put it at odds with tea room tradition. As the tea room movement progressed, the concept began to take on new forms, especially in urban areas. In communities like Greenwich Village in New York, tea rooms catered to the bohemian set: artists and intellectuals who treated the welcoming eateries like third places. If many suburban and rural tea rooms leaned conservative and decorous, these urban variations were often convivial and exuberant and home-like, mostly in their permissiveness of relaxed, casual behavior.

In cities like Chicago, urban tea rooms also provided patrons avenues in which to challenge conventions that prohibited women from drinking alcohol in public. This was at a time when most public eating and drinking establishments were the preserve of men, and “respectable” women only imbibed in the privacy of their homes—and even then with much discipline.

In response to a growing market for women’s public amusement, tea rooms were among the new commercial spaces, marked by their dainty and refined feminine interiors, that sprang up to appeal to monied women consumers. At venues like the tea room at Marshall Field’s department store, unescorted “respectable” women began to politely push back against the rules that throttled their sociability and reserved pleasure-seeking for men. In tea rooms, to the dismay of social commentators who viewed their behavior as selfish and unbecoming of ladies, women sipped mixed drinks, cocktails, wine and cordials alongside their lunches and high tea, and, in doing so, began the process of changing the face of femininity.

Fast forward to present day, and tea has taken on new meaning, especially among women, in the context of self-care. The women-focused wellness industry touts tea as a sort of super elixir that can support any number of health goals, from liver detoxification to anxiety reduction to cognitive focus, depending on the precise blend of leaves and herbs. Further, the very act of brewing tea and slowing down to enjoy it without distraction is lauded as a calming, meditative practice integral to overall good health. A nightly cuppa is now a prescriptive element of any good bedtime ritual.

At Herstory in North Buffalo—a retail and community gathering place focused on wellness for the mind, body and soul—a newly installed tea bar stands as testament to the trend. There, mother-daughter owners Susan and Ciara Morreale serve Teamotions brand tea blends made with adaptogens, which are powerful plant compounds that seem to help the body resist detrimental effects of stress. The teas are complimentary at certain Herstory partner events like donation-based mindful yoga held every Sunday morning, as well as to anyone who uses Herstory as a coworking space during standard business hours. There’s even a light-blocking meditation booth on site, where customers can sit with a cup of tea in utter, mind-healing placidity.

I suspect women’s embrace of tea as one element of their larger embrace of holistic wellness and nontraditional medicine is part of a much bigger and more significant political story. The exponential growth of the self-care and wellness industries—of which tea is certainly a part—suggests a gender that’s turning its back on a traditional healthcare system that has for too long been dismissive of its pain, physiologies, emotions and intuition.

But that’s for another article. For now, if you’ll excuse me, I have a pot of tea to attend to. I am, after all, a feminist.

The historic feminism of tea was not limited to entrepreneurship and sociospatial gender politics. You might also say it was the official drink of women’s suffrage.

In the early 20th century, before American women had won the constitutional right to vote, suffragists extensively employed tea rooms and tea parties to organize, raise funds and recruit supporters. Tea was so part and parcel to their campaign that major tea producers like Lipton’s specifically advertised and manufactured goods in support of their cause.

Some historians speculate that suffragists’ embrace of tea thwarted the popular notion that women who agitated for a voice in politics were gender-deviant radicals. In situating themselves in the polite environment of the tea room and performing the role of picture-perfect domestic and hostess, all the while vocally championing their rights, they perhaps hoped to make less affronting to moderates the “unwomanly” audacity of their bold political ideas.