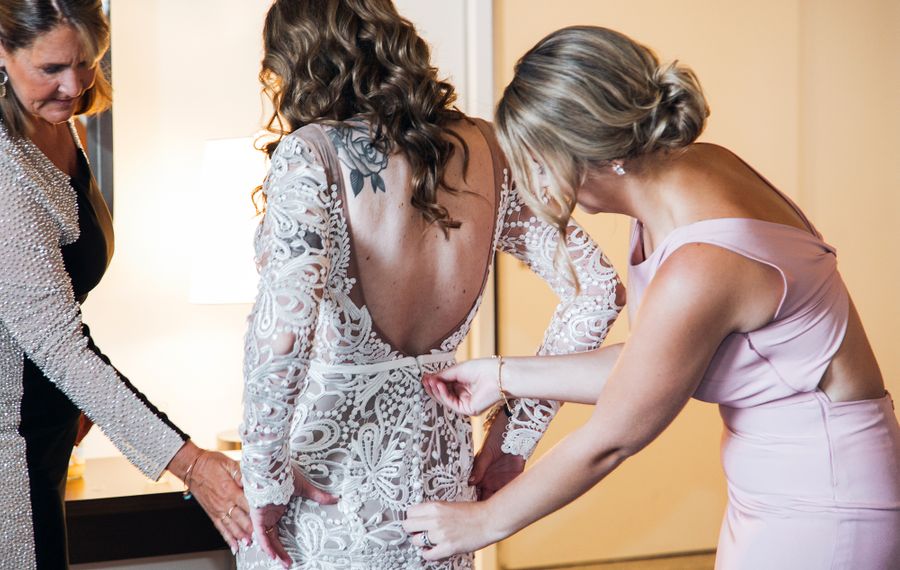 Tens of thousands of wedding dresses are purchased each year—but to the individual brides selecting their gowns, it’s a unique, personal experience. The shopping process can be highly emotional, delightful and stressful all at the same time. So we asked five local brides to share what wedding dress shopping was like for them. And (no surprise) each had a unique story to tell.

“I thought most people would look at me like I’m crazy,” she says. The 32-year-old nurse wasn’t a “bride-y bride.” She wanted her wedding to fiancé, Dan, to be a casual yet beautiful day. (The two married in October at Knox Farm in East Aurora.)

Despite her trepidation, her assistant at Bliss Bridal in Hamburg immediately understood her vision—and started pulling dresses. First up: An ivory Lillian West lace gown with bell sleeves. Since Natalie had never envisioned wearing that silhouette, the assistant clipped them back. She could always get it tailored straight.

But even still, Natalie didn’t like the dress very much. She didn’t even keep it in the dressing room, but rather had the assistant put it back on the rack.

She moved on, trying around six other dresses. But that first dress kept popping back into her head. So Natalie asked her assistant to bring it back for her to try on (again).

“I totally thought crying when you find ‘the one’ was just for ‘Say Yes to the Dress’ and for TV,” she said. “But I started to cry. It was just a celebratory moment.”

Her Bliss assistant had “nailed it.”

Taylor Amankwaah had never tried on a wedding dress before she went to her first consultation at Lovely Bride in Rochester. She was nervous going in but tried not to put too much pressure on herself to find the dress that very day.

“I was afraid of trying on 40 dresses and just being so indecisive,” she says. “It’s nerve-wracking through (the process) because the whole time you’re thinking these pictures are going to live forever. In 20 years, am I going to look back and does this dress still look like me?”

Only five gowns later, Taylor had found her dream dress for her April wedding to fiancé Jake at Hotel Henry. And while five dresses may not seem like that many, each had a different, distinct style. From sleek and formfitting to a “true princess cupcake” dress with sequins, she tried quite a variety.

The first dress she stepped into was a Boho-classic blend with lace, low-cut back gown designed by Made With Love. Taylor knew almost right away this was it—but tried to fight it a little. She didn’t want to try just one gown and have that be it. But as she tried on other options, she kept thinking about the first one.

“I guess it’s kind of true that you do know when you put it on, in a way,” she says.

Sarah Bubar remembers a sign in the restroom at Bliss Bridal that read: “Pick the dress that’s most like you. That’s the one he fell in love with.”

For Sarah, the dress choice was an easy one. The first gown she tried on was a strapless champagne-colored Essense of Australia dress with ivory lace overlap and pearl beading. When she walked out of the dressing room, her entire shopping party cried.

And that’s a lot of tears: The 27-year-old brought her mother, mother-in-law, best friend and two sisters with her.

“I loved (the dress) because I just felt like it hit me in the right places. It was very romantic,” she said. “It was just simple but there was a lot (of detail).”

But the day wasn’t done just yet. Both of Bubar’s sisters had traveled from out of state, one from Virginia and one from California, to be with her on her special shopping excursion—and Sarah had planned the whole day. So the group moved on from Bliss to visit two other shops.

She tried on about nine more dresses, but none made her doubt that first dress was it. Happily, she had a consensus: All five of her shopping companions agreed.

Sisters Chelsea Coulter and Shannon Mariglia (both formerly Firth) got engaged on the same day, embarked on the wedding planning process together—and both found their dresses during shared appointments at Dalia’s Bridal in Buffalo.

“We are super close,” Shannon says. “We really value each other’s opinions. It was really helpful and fun.”

Chelsea booked an appointment for her and Shannon because their sister Taylor was in town. Their sister Sierra also joined, along with their mom.

Chelsea doesn’t like having a lot of attention on herself, so she was also glad to share the special occasion with her older sister. And Shannon, who’s self-admittedly indecisive, knew she’d benefit from having everyone at her appointment.

“Shannon went first because I was nervous,” Chelsea said. “I wanted to see how everything went with her. Also, she was getting married first.”

Shannon was skeptical at her appointment because she didn’t know exactly what she wanted. She tried on about a dozen total dresses, but found her dress about eight styles in.

“I didn’t have one of those moments like on TV,” she said. “I was like ‘oh, this is very comfortable, it’s me’ and I felt like it was a good balance of what I was looking for.”

Shannon was pretty positive it was the one she wanted but tried on the rest of the selections. Then she revisited her favorite again—a strapless Justin Alexander with a sweetheart neckline—which sealed the deal. The dress featured a creamy yellow underlay with a pure-white lace overlay.

Then it was Chelsea’s turn. She was super excited for her sister but tried not to get her hopes up for her own dress.

Chelsea wanted a flowy, beachy, bohemian look for her wedding day. But the first few options she tried on a left her feeling like she looked “little girl-ish.” Her mom spotted a more sophisticated style in the window and suggested Chelsea try it on. From there, she branched out from her original vision.

Chelsea tried on about 10 more dresses, then narrowed it down to two. While they were similar in style, she preferred the Stella York, a strapless layered tool gown with lace and appliqués, which she found more flattering. All it needed was a little pop of sparkle—so she added a belt.

“I felt like the belt was just enough where it was kind of a wow factor,” she said. “I liked that it wasn’t your typical plain white dress.”

Shannon married Scott in March 2018 at New Covenant Church in Buffalo and had the reception at Antonio’s Banquet & Conference Center in Niagara Falls. Chelsea married Tim in June 2018 at The Chapel in Getzville followed by a reception at Kloc’s Grove in West Seneca.