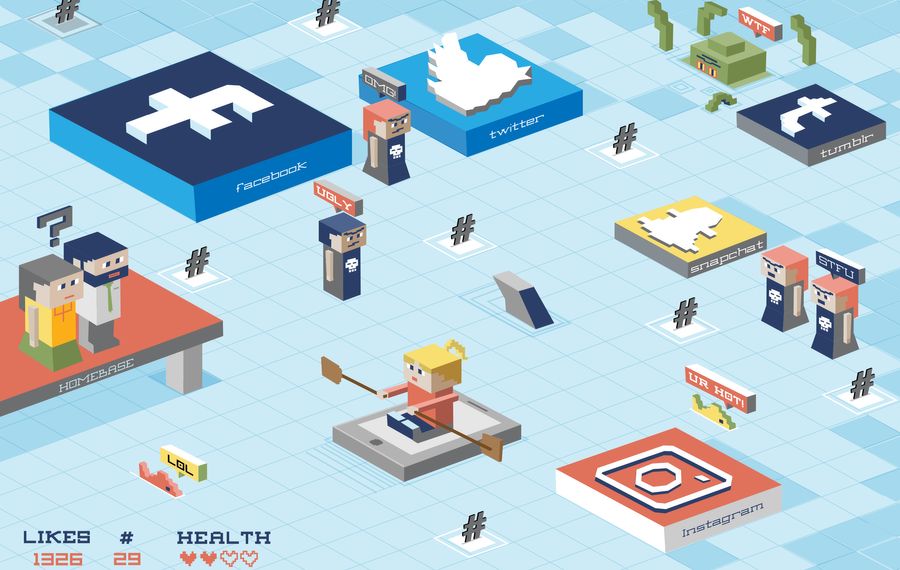 Emily works hard in school, loves her dog and plays soccer year-round. She participates in church youth group and helps out around the house. Her parents trust her completely.

But as the Wheatfield 13-year-old prepares to enter high school this year, Emily’s family approached a difficult crossroad that comes with raising a teenager: She wanted a smartphone, and access to a few of the most popular social media apps and games.

For parents of preteens and teenagers, navigating kids’ access to tech and social media is a critical part of adolescence. Yes, they can be important educational and networking tools. But with that comes the well-publicized and increasingly frequent dangers: Online bullying, increased anxiety and depression, and addiction that damages relationships and futures.

Local educators say incidents of anxiety, depression, bullying and social pressure are skyrocketing as preteens are given the responsibility of owning a smartphone at an ever-earlier age.

“Parents are giving up the keys to the car and you’re not teaching them how to drive,” said Ronna Glickman, a family and consumer science teacher at Mill Middle School in Williamsville, as well as a social media safety speaker for parents and students.

Teens simply don’t have the awareness to recognize when social media and its relentless immediacy are causing serious mental and physical health concerns. And for parents who didn’t grow up with it themselves, it’s a whole new (and unfamiliar) world.

Tess responded in kind, and the situation quickly escalated. Tess said she started getting harassed by her former friend’s family members. The culmination was an angry late-night visit to Tess’ family’s doorstep by her friend’s mother, who’d also gotten involved in the social media crossfire.

Although she thinks everyone behaved badly — including adults — Tess ultimately takes the blame. “I took it a step too far,” Tess admitted. “I realize what I said had an effect.”

Today, Tess is still active on social media; but with some changes. She has a “real” Instagram account with 1,000-plus followers plus a “fake” account that’s limited to a closer circle of trusted friends. She saves anything personal for that account. And she’s more careful about what she puts out there.

Staying on top of things

Emily from Wheatfield played the perfect card when it was time to convince her parents that she wanted — no, needed — a smartphone. How else would she keep track of her friends’ contacts as they graduated from eighth grade this spring, going their separate ways into high school?

Emily said she mostly uses her phone for music, contacts and a few apps like Snapchat and Instagram, for sharing photos and short videos. She keeps in touch with friends from summer camp and also likes to play word game apps, but between soccer practice and homework, there isn’t much time to mindlessly scroll through her screen.

Like many people, Emily also keeps the phone nearby at night because she uses it as an alarm clock. Some people, she said, will text her late at night. But she added that she has no problem muting her phone or putting it in “sleep” mode.

Emily said she’s seen friends behaving poorly on social media, and it shows their true colors. But from day to day, she’s largely unaware of the bullying, harassment and FOMO — fear of missing out — that pervades some social media circles.

“It does happen to some kids,” Emily said. “They might be best friends and get in a little fight. I don’t think it’s something to worry about every day,” she said, pausing. “But it does hurt a lot of people.”

Tess, 15, thinks that the downside of social media is often different than what schools have been drilling into them since middle school. She doesn’t see or hear about a lot of overt cyberbullying, for example. There was one time in middle school, she said, when a boy started a “poll” page on Twitter where followers could weigh in on questions like “who’s prettier” or “who smells the worst,” but she said it was shut down within a day when a lot of kids reported it.

“Adults think we get it less than we do — but we see what’s going on,” said Tess.

What’s ultimately more dangerous, she thinks, are the subtle pressures. Never has popularity been so overtly measurable.

“Girls my age want to make sure they are putting out the right image,” said Tess. She explains that living up to the idea of, “No, I really am as perfect as I seem on Instagram,” is a lot of pressure — as is getting enough “likes” for your latest post.

In many districts around Western New York, tablets are an important learning tool built into the curriculum. And smartphones are in the hands of kids who don’t particularly need them — until there’s a late soccer practice or an emergency change of plans with family.

These are the waters educators are navigating with preteens and teenagers. And they’re on the ground floor when it comes to seeing the damage social media can inflict on young people’s well-being.

“For a lot of young people, it just feels like the walls are closing in,” Hamburg School District Superintendent Michael Cornell said. “Because you can never get away from it. The intensity is so hot and fast, it’s difficult for adolescent brains and their emotional responses; they struggle to deal with it.”

Cornell describes a school environment that within the walls of the building looks much the same as it did before the advent of smartphones and social media. Kids participate in activities, hold themselves to increasingly high educational and extracurricular standards and contribute to their communities.

But the ups and downs of the school day now carry over into the ride home, during dinner, while trying to study and late into the night, the phone buzzing and glowing as kids lob inappropriate, funny, cruel, insightful, damaging and dumb messages.

That’s the challenge for Hamburg schools and others across Western New York. Hamburg, Williamsville and other districts locally are screening the film “Screenagers,” an award-winning documentary about the use of social media, video games and the pervasiveness of digital communication to the detriment of students’ academic goals and lifestyle.

Cornell said Hamburg also has student ambassadors who talk to younger students about helping to create a culture of kindness, along with an awareness of the damage cruelty on social media can cause.

Tina LaMendola, a social worker in the Hamburg School District for 17 years, said she can see firsthand the rising rates of anxiety and depression, which correlate closely with both social media and video game use, combined with the increasing academic pressure students are putting on themselves.

“I just don’t think we’re talking about it enough in general,” LaMendola said. Students, she added, especially girls, are inundated with unrealistic photos of models posing on Instagram. That’s followed by a Snapchat story from the killer party to which they weren’t invited. And a Facebook album will show your peer’s stack of ribbons from the weekend competition.

“It’s just an undercurrent,” LaMendola said. “There has to be a dialogue, a conversation. Just having that dialogue, they’ll say how refreshing it is to feel normal.”

That’s why Glickman says every parent needs to monitor their kids’ smartphone and social media use. That means using sharing apps that record every single text and scroll. Some parental monitoring apps will record screenshots of phones on the minute.

“If parents did that, there would be a lot less, if they knew what their kids were saying, of what’s being said. They’d be able to intervene,” Glickman said.

Kids are always one step ahead, Glickman said. She described a faux-Instagram site off parents’ radars that disguises itself as a calculator app. And kids who come in too tired to even take an exam, let alone pass it, because they played Fortnite until 4 a.m. while parents were sleeping.

And while having two Instagram accounts has helped foster some privacy in Tess’ social media world (and her parents are aware of both), this new and commonplace practice does have a downside. “FInstas” — a.k.a. fake Instagram accounts —are the latest way for kids to get around parental supervision. (Just when you think you’re following your child’s account, there’s another one you didn’t even know existed.)

The most important step that parents can take when they give their kids a smartphone is to hand it over with an iron-clad contract. Set the limits immediately. Because taking the phone or game away from a teenager who is already addicted is like taking away an addictive drug.

“It doesn’t matter how much I trust her. I’m always going to be overprotective and hover,” Emily’s mother, Julie, said. “We laid the rules down before they even got the phone.”

Twitter: Quick-hit, sharable messages (280 characters max) and the go-to spot for real news and analysis, along with edgy and sometimes just-plain-cruel snark. Pros: The best social media tool for breaking and immediate news, and some brilliantly clever commentary. Cons: Ripe for bullying, piling on, or subtweeting, which is the act of calling someone out “behind their back,” without tagging their handles in the message.

Instagram: Twitter, but with photos and short videos! Pros: So many cute dogs. Great way to show friends your proudest achievements, a good book you’re reading or the perfect pizza you had last weekend. Some celebrities are famous for nothing more than being good at it. Cons: Reinforces a dangerous and unrealistic standard of beauty and wealth. Kids (and adults) also like to post short videos of them doing really stupid stuff.

Snapchat: A messaging app where tailored videos and images can be sent to a friend or groups of friends, which can be viewed once, temporarily, then disappear. Pro: Lots of fun add-ons and graphics to manipulate photos. A safe way to be silly or show all the cool stuff you did on vacation. Con: Images and videos that you’re assured will “disappear” after being viewed once? What could go wrong?

Tumblr: It’s a microblogging platform that acts like a message board. Messages and video accumulate around a conversation starter. Some people also use it as a place to post music performances, musings, art or images. Cons: There are few privacy restrictions and it’s a beehive of extremism and hate. Teens are quick to find the latest messaging apps like Kik Messenger and WhatsApp. They’re less popular than Facebook and Twitter, but the danger there is it invites conversations with strangers or “online friends,” behavior that should be monitored closely.