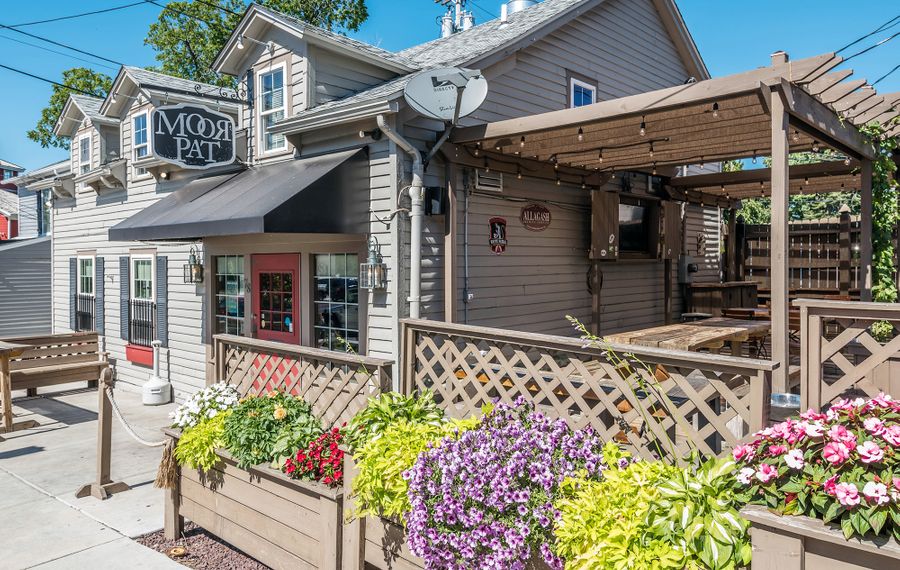 What’s in a name for local WNY businesses?

Some names are obvious first or last names of individuals or family members. Some involve a Buffalo pun. Some have ties to establishments from the city’s past. And some are, well…different. We sought to find how their names came to be.

Since opening its tap room in 2015, Big Ditch has become one of the city’s most popular watering holes. While the genesis of its beer names (Hayburner, Electric District Pils) warrant backstories of their own, we asked president and cofounder Matt Kahn about the name of the brewery.

“We wanted a name that referred to a time when Buffalo was at its historic peak,” Kahn says. “We loved the story of the impossibility of the Erie Canal being built, how it was constructed by hand, how nobody believed it would ever get finished, and how it changed the future of Buffalo and New York State.”

That sense of struggle and accomplishment carried great resonance for Kahn and the Big Ditch crew. “At the time, we were also feeling this mountain of hard work required to get our brewery built, with a long-term goal of putting Buffalo on the map for having a nationally known brewery and world class craft beer. So the name seemed to fit.”

With expansion into multiple food trucks and two brick-and-mortar locations in less than 10 years, just who is Lloyd, anyway?

Co-owner Chris Dorsaneo says the answer is everyone. And no one. The explanation is as flavorful as Lloyd’s Rocket Sauce.

“Lloyd is a fourth degree ​black-belt in karate​. Lloyd is a farmer ​I​ used to work for. Lloyd is a sage that left us his recipe ​book from his world travels. Lloyd is a flavor scientist that teaches at MIT,” says Dosaneo. “Actually, the truth is Lloyd is a figment of our​ imagination.”

Dorsaneo credits co-owner Pete Cimino’s sister, Nina Barone, with helping come up with the name. He says Barone “tore up a list of potential names for the company ​that we created,​ and suggested ‘Lloyd.’ We needed to name ​our first truck and give it its own persona, one that could be much greater than the two of us, almost bigger than life. ‘Lloyd’ can do anything and be anyone.”

Mike Shatzel is the restaurateur behind some of Buffalo’s new favorites (Allen Burger Venture, Liberty Hound) and most iconic spots (Cole’s, Brennan’s Bowery Bar). Two biggies for beer lovers are Elmwood Avenue’s Thin Man Brewery and Williamsville’s Moor Pat. The latter, of course, is “tap room” spelled backwards. But the way Shatzel came upon this moniker is certainly unique.

“I was sitting at the bar in a brewery called North High in Columbus, Ohio, and noticed the back side of the glass door in the brewery side. I was seeing the reverse side of ‘Tap Room’ and it read, ‘Moor Pat.’ I thought it would make a cool name for an old British-like pub with lots of wood and a cozy, comfortable, laid-back vibe. When my partner at Moor Pat, Peter Braun, found our location on Spring Street, I knew I found my ‘Moor Pat.’”

The Thin Man name was inspired by a trip to a Buffalo landmark.

“One day I decided to take my daughter, Nola, to the top of City Hall,” Shatzel says. “The elevator only goes up so high, so the last two floors are stairs. They have ‘do you know’-type posters on the walls. One was about the crash test dummy being invented in Buffalo — nicknamed ‘Thin Man.’”

Public Espresso co-owner Sam Scarcello says the inspiration for his coffee house’s name came in both literal and figurative senses.

“We loved the concept of traditional public houses as the gathering center of a town or village, where ideas and knowledge were shared among individuals. We hoped to build a space that would foster a similar sense of community.”

It also reflects his goal to have an outward face to the community, he explained. At first, he says, he thought it would take the form of a coffee bike or coffee/food truck. “What it later grew into, and something we still do to this day, is setting up at local farmers markets, festivals and events that allow us to meet our neighbors, share our passion for coffee and hopefully get others passionate about it, too.”

Owner Sharon Randaccio says the name for her women’s apparel store on Elmwood Avenue came from an idea session held with her girlfriends.

“[We] were sipping Champagne on my deck at my waterfront home, brainstorming shop names. Ideas suggested were a water theme, given our initial location in HarborCenter; something a bit provocative, given the founder is a sassy redhead — that’s me; and something alluring, given the great lines we would be carrying.”

She said Red Siren combined those ideas perfectly, inspired by the sirens in mythology.

“Besides, everyone wants to be a mermaid, don’t they?” says Randaccio.

West Side hotspot Tipico Coffee has developed a devoted following since opening in 2015. The name, says owner Jesse Crouse, was inspired by some of unique places in which he’s worked.

“I’ve spent a lot of time working in Central and South America, and I fell in love with the regional foods,” he says. “In Spanish, ‘comida tipica’ means typical food, and whether you were in Colombia, Costa Rica, or any other country there, it was a commonly used term. A lot of the local restaurants would be referred to as ‘tipico,’ so when the exporters I’d work with asked where I wanted to eat, I’d often say ‘Tipico!’”

The name also calls to mind Crouse’s goals for his establishment.

“I wanted to create a place that became typical for people in Buffalo — a part of their regular day-to-day, but that also spoke to the regionality of our offerings.”

In just three years, Toutant has risen to the top of the local restaurant hierarchy. Owner and chef James Roberts says there is no literal translation for the word “toutant;” it was inspired by family history.

“It was the name of the family hunting, fishing and trapping camp out in the Louisiana marshlands at the turn of the century,” Roberts explains. “The camp acted as a hub of our family’s livelihood and sustenance in the early 1900s…a lot of my relatives are still part of that shrimping and oyster farming community.”

Dobutsu, Roberts’s new Asian-Pacific restaurant on Seneca Street, “is a whole other animal — literally.” It is, in fact, the Japanese word for animal.

“It stands for the little animal inside of me that needs to be fed,” Roberts says. “This restaurant is an opportunity for me to get to cook and eat the foods that I seek out in other cities when I travel.”

There is a mystery behind Williamsville’s venerable Eagle House. General manager Tricia Brown’s family has owned the restaurant for more than 40 years, but says in all their research they’ve never learned the name’s genesis. Since its founding in the 1800s, it’s always been a variation on a theme: from the Eagle Hotel to the Eagle House Tavern to the Eagle House Restaurant.

“On October 20, 1892, the Amherst Bee devoted its front page to illustrations of an American flag, an eagle and a rooster, and this headline: ‘Hurrah for the electric railroad. Let the eagle scream and the rooster crow! Williamsville is to be connected with Buffalo by a first class electric railroad,’” said Sherman. “The trolley ran down Main Street right in front of the Eagle House.”

If you’ve been to Sweet Jenny’s Ice Cream in the historic Williamsville Water Mill and wondered what goodies await upstairs, just ask a kid, teen, tween, or, well, any adult in an Avengers T-shirt.

They will eagerly tell you about 1811 Comics, one of WNY’s coolest and most well-stocked comic book and toy shops. Husband and wife Howard and Tara Cadmus own both. As expected, he says the name of Williamsville’s only comic shop is a direct reference to the Water Mill’s past.

“The name did in fact come from the year the building was built and the date that appears on the front,” he says. “Since the image is on all of the building icons used by the village, it seemed relevant.”