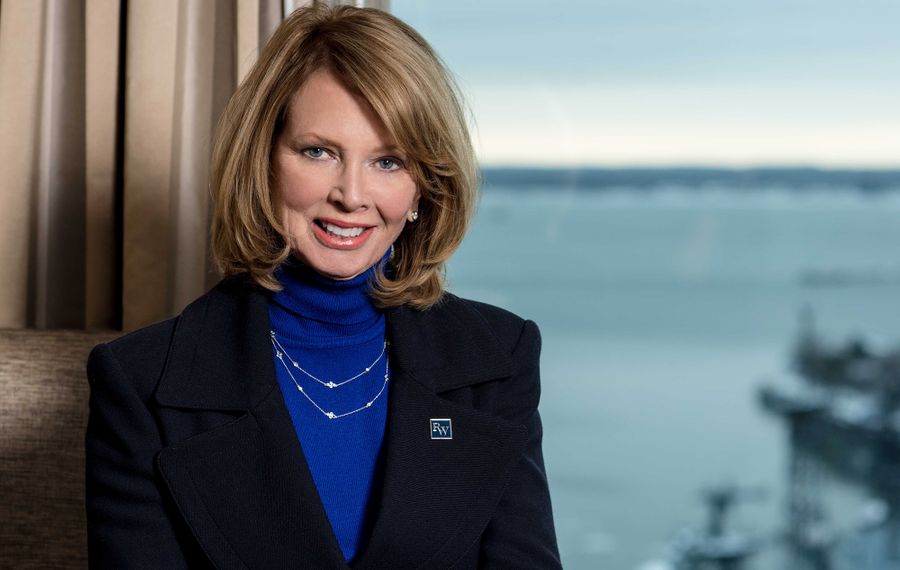 With the impending sale of the Buffalo Bills in 2014, most fans were united in anxiety over a single question — would the team be sold to an owner who would relocate the beloved franchise? It was a question that hung in the air for several years preceding the death of Ralph C. Wilson Jr., founding owner of the hometown team, and it intensified upon his passing in March 2014 at age 95. With so much focus on the negative possibilities surrounding the sale of the team, few in Western New York considered the incredible benefits the region could garner from the inevitable sale.

“Ralph was a great visionary; he loved the game, and he had a vision of what it could be,” his widow, Mary Wilson, says, noting that people laughed at Wilson when he first got involved in professional football. “Similarly, he had a vision for philanthropy that he saw as a full circle from football, to giving all of this back to the community, and to the fans that he loved.”

Though he may have called Detroit home, Wilson had a passion for Western New York that extended well beyond what happened on the football field. It came as no surprise to those who knew him that, before his passing, Wilson had laid the plans for a charitable foundation in his name to distribute the bulk of his wealth back to his hometown of Detroit and his adopted hometown of Buffalo.

The Ralph C. Wilson Jr. Foundation is operated by a small staff working from an understated office in Grosse Point, MI, just south of metro Detroit. It is, as Mary Wilson put it, a space Ralph would be proud of.

“We moved to downtown Detroit, to an area that needs some belief in it, an area that is turning around,” she says. “If we had a big, fancy office, and we were wasting money on things that don’t make a difference in people’s lives, Ralph would hate that.”

It’s how he lived his life.

“Ralph was not trying to impress anyone, he was himself, and he didn’t make a big splash,” she says. “When we were in Buffalo, Ralph rented a condo, Ralph rented furniture, he had a rental car — his friend from L.A. nicknamed him ‘Rental Ralph,’ but Ralph just didn’t care about that stuff.”

Instead, Wilson says, her late husband focused on people, and she believes he would love the commitment to investing so heavily in Western New York that the foundation has made since his passing. Certain areas Ralph felt strongly about are the focus of the foundation’s efforts.

“Ralph cared deeply about the caregiver, whether it was nurses, nurses’ aides or Hospice, he cared about helping them,” she says. She said he also had a passion for students, technology, business, and of course, sports.

Mary Wilson with husband and founding Buffalo Bills owner Ralph C. Wilson, who died in 2014 at the age of 95. (Photo courtesy of Mary Wilson)

He also lived by a set of values that Mary Wilson carries on through his foundation.

“We really want to operate much like Ralph did – by being creative and compassionate, focused and determined, thoughtful and innovative, and collaborative,” she says.

Speaking to those ideals, Wilson did something both creative and innovative — he put a time limit of 20 years on the trust to give away all of the more than $1.2 billion in seed money, a process that has already yielded significant results in both Buffalo and Detroit.

David Egner is the President and CEO of the foundation. As the man charged with distributing more than a billion dollars in grants, Egner says it’s a more complex proposition than one might think — particularly given the rather specific parameters set forth by the foundation’s namesake.

“If we were to come into Western New York and thrust our solutions upon people, they wouldn’t be sustainable,” Egner says, explaining the foundation’s careful approach to distributing grants.

“Instead, our approach has been very much collaborative with other funders and key groups, and we’ve spent the first couple of years analyzing existing data, bringing everyone together, inspiring a shared vision among them and then make grants.”

Egner says given the limited life of the foundation, forming strong partnerships in Western New York is crucial to maximizing the impact of the grants. He cites Help Me Grow Western New York, an early childhood program, as a good example.

“We saw their program having a tremendous impact coordinating multiple funding agencies and organizations,” he says. “We very quickly moved to bring it to scale through a series of partnerships that we facilitated.”

The result was the foundation awarding Help Me Grow WNY a $1.8 million, three-year grant earlier this year. Lynn Pullano, the director of the organization, says the grant is helping them expand from two to eight local counties in their mission to help young children connect with agencies and services to ensure lifelong success.

“We weren’t equipped to do that on a grander scale until the Wilson Foundation,” she says. “We can now help in the rural areas in those counties, where transportation, access and the overall number of services available to children are limited.”

Though Egner and Co. are working tirelessly to continue to identify similar worthwhile organizations and distribute funding, prior to this stage of the foundation, the life trustees gave away — at Wilson’s direction — roughly $60 million in seed money. Much of that money supported organizations in Western New York, including the Food Bank of WNY, which Mary Wilson singled out as an organization dear to her heart.

Marylou Borowiak, the former president and CEO of the Food Bank of WNY, says the $500,000 grant they received from the foundation in January 2016 made a difference that is still being felt throughout the region.

“We needed a lot of infrastructure repairs, and people don’t want to give you money for that,” Borowiak says. “But they recognized that in order for us to provide for the families that we do, we needed to have a strong infrastructure, and they were willing to invest in the Food Bank.”

Borowiak says the crown jewel was a 26-foot refrigerated truck with a lift gate.

“We increased our distribution to 20 percent more people and over 700,000 more pounds of food because of this new truck,” says Borowiak.

Fast-forward to early 2018, and Egner says, “the clock is ticking” with roughly 17 years left for the foundation to fulfill Ralph Wilson’s mission.

“I think at the end of that 17 years, there will still be work to be done,” he says. “We’ll be talking about how to sustain this through perhaps endowment grants or chairs that put staff in place, to keep this moving forward.”

It’s a notion that warms Mary Wilson’s heart as she sees the legacy her husband left behind continue to grow.

“One of the joys of being with him was that it was such a natural, simple, and wonderful life together,” she says. “The foundation takes that part – being humble – and works with people who give us a wonderful opportunity to help them.”

Today Mary Wilson devotes a significant amount of her time to carrying on her husband’s passion for philanthropy, and she says it is something she is proud and honored to do.

“Ralph had such a strong vision of what this could all be,” she says, pausing to collect her thoughts. “I think he would be so proud and so thrilled at what we are doing… I just wish he were here to see our impact.”