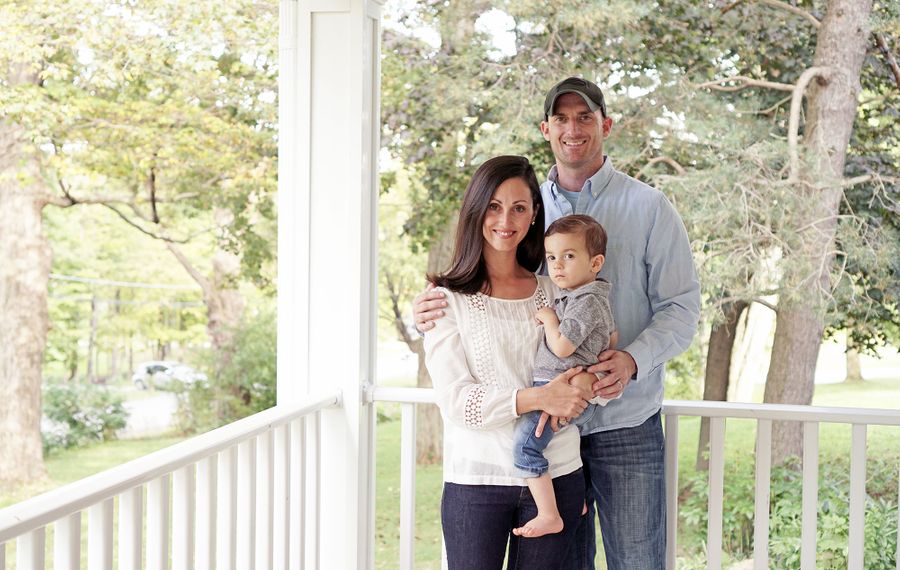 He walks into his son’s bedroom and lifts him out of his crib, and after a quick diaper change, they lie in bed and watch an episode of The Lion Guard, Quinn’s favorite TV show. Then it’s playtime while Nick feeds him breakfast. Their hour and a half of uninterrupted one-on-one time is baked into Quinn’s daily routine, just like his afternoon nap and scheduled music class or swim lessons. They share another hour or more together beginning around 6 p.m., when Nick’s wife, Maria, starts her workday. Nick gives Quinn a bath and puts him to bed for the night, then starts in on the dishes and the laundry.

The Bonds are very intentional in how they structure each day. In part, it’s because they both work – Nick is executive director of the Southtowns YMCA; Maria runs a wedding branding business out of their East Aurora home. A well-planned daily schedule means they can share responsibility for Quinn’s care and still meet their career obligations. But it also ensures that Nick gets the time he needs – and wants – to spend with his son.

"It’s a team effort and shared responsibility. But it’s responsibility that you want. I want to spend time with Quinn. Being a parent is the most important thing I’m ever going to do," Bond said. "My time revolves around his schedule. His ime doesn’t revolve around my schedule. He’s the number one focus. "

As family structures and dynamics have evolved, so too have the roles of American fathers, who are contributing to family life in more ways than ever. The notion that dads are supposed to go out and provide as the family breadwinner while moms take care of the kids and run the household has been marching toward obscurity for years. Recent research by the Pew Research Center supports the reality that the lines separating traditional gender roles are not only blurring, but are being erased altogether, as modern families like the Bonds move closer to a true partnership in every sense of the term.

Among the findings in the Pew study:

The participation of fathers is a crucial piece to a child’s development, says clinical psychologist and UB professor of education Gregory Fabiano. Positive father involvement helps children to be more socially competent and develop appropriate peer relationships, and evidence suggests that because dads tend to use more complex language and speak louder, they help to promote language development and spur greater academic achievement in their children.

"Dads do often play a complementary role, but they also provide a unique contribution to many aspects of child development," said Fabiano, the father of three children ages 7 to 13. "If a dad has a positive impact on a child, the other partner will also report fewer problems in terms of behavior. There’s a spillover in how the other parent sees the child as well."

Fabiano is also the creator of the COACHES (Coaching Our Children: Heightening Essential Skills) parenting workshop that uses athletics as a way to teach fathers positive parenting skills. The program, originally developed for children with challenging behavior issues, has been adapted as an intervention to reach dads in a traditional dad-centric arena: youth sports leagues. At the end of a 6-8 week "season," after they have received instruction and tips on how to "catch" their child being good — instead of only speaking up with a correction — Fabiano has found that participating dads are less critical and negative, resulting in exponentially more positive interactions between parent and child over time and leading to better family relationships.

Building better families is also an important aspect of Bond’s work. At the YMCA, Bond leads initiatives like family night programming that encourages family engagement and strengthening of the family structure.

At home, Bond wants to instill the same qualities in his son, one of the the driving forces for being so involved in his upbringing. "This is 100 percent my responsibility, too. I’m going to help mold who Quinn is going to be, so I need to be sure I’m spending that quality time with him," said Bond.

With that comes other responsibilities, as well. Cooking, cleaning, driving kids to and from practice and rehearsals — it’s all just an unquestioned part of the job of being a dad.

"We’re reading, we’re making dinner. It’s what we do," said Stan Wojton, a father of two who worked with fellow educator Bryan Rotella to help implement Fabiano’s COACHES program in Niagara Falls schools. "In this family model, there are no more stereotypes. We’re going to take on whatever responsibilities and do whatever it takes to make our children successful, however you want to define success."

"It’s not an add-on, it’s an expectation," said Rotella of his involvement in the day-to-day development of his 5 and 2 year olds. "My wife and I are equal partners. Those are our kids, they’re our responsibility. The expectation is that we’re in this together. We’re a team."

With responsibility comes reward; dads recognize there’s also a sense of joy in parenting. Bond credits his own father, Richard, for modeling how to balance work and family. He worked midnights for years driving a forklift truck for General Motors, even when his seniority would allow him to choose a different shift. He stayed on midnights so he could get home in the morning to drive Nick to school, go to bed, and be up again when he got home from school in the afternoon, so he could play catch with him in the yard or attend his games in the evening.

Now Bond can’t wait to do the same thing with his son.

"There’s nothing cooler in the world than opening that door in the morning and you hear, ‘Dada?’ And you’re like, ‘Yeah, dude, it’s me!’" Bond said. "I don’t want him to grow up too quick, but I look forward to when he’s 5 and we can throw the ball around together. I feel bad for my wife because more and more as we get older, I’m going to want to occupy more of his time.

"My whole life revolves around this little guy, and I wouldn’t want it any other way."

Editor’s note: For more information on the COACHES program, call 829-5975.

What about single dads?

While statistics show fathers taking greater responsibility for childcare within the family nucleus, there has been little movement in the number of single fathers who have sole custody of their kids.

Most decisions pertaining to custodial care are made by mutual agreement of the parents. It is estimated that only about 5 percent of child custody disputes are determined by the court or negotiated and settled with the aid of attorneys, but the roles that fathers play in their children’s lives are certainly an important factor in how the cases are resolved.

“In my experience, the court considers the best interest of the children in awarding custody and primary residency to one parent or another. They don’t necessarily lean towards placement with the mother anymore,” said Carolyn Chase, a Western New York attorney who has practiced family law since 2003. “I’ve certainly had cases where the father is awarded primary residency of the children, and the mother is given supervised or unsupervised parenting time.”

In mediated cases, such as a divorce proceeding, the court will often encourage — or even order — parties to share joint custody, in which residency is granted to one parent and a visitation schedule is determined for the other. Chase said that in the majority of her joint custody cases, the mother is granted primary residency, often due to issues such as schooling, the children’s wishes, or absence or inactivity of the father. But, the courts will sometimes award parents joint custody and shared residency, where the children alternate between living with the mother and father.

“The courts encourage fathers to participate fully in the parenting of the children and are not hesitant to order sole custody and or joint custody with the mother and primary residency to the father,” Chase said. “Each family is different.”