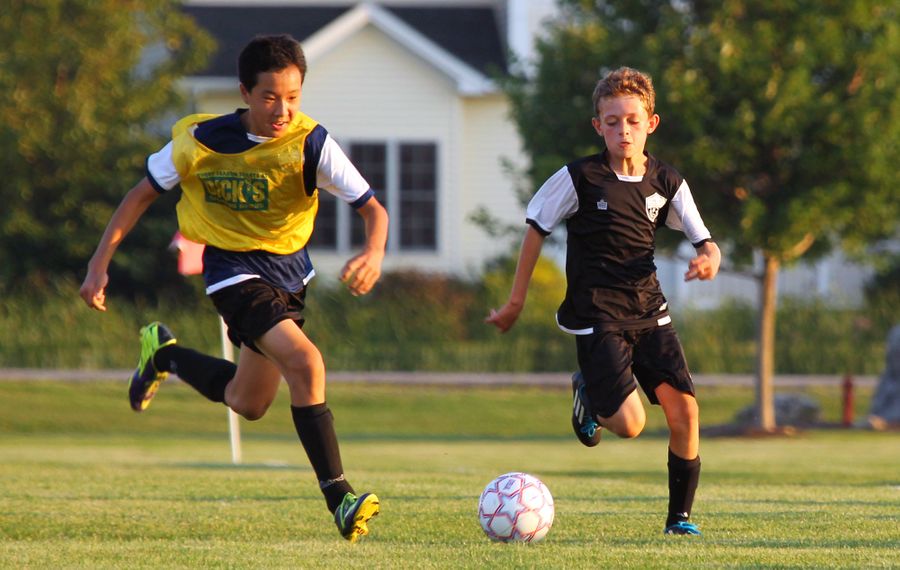 Chances are you played a sport while growing up. Not just one sport — all of them. As the seasons changed, so did the games. You didn’t always need a referee, and home-field advantage was just a fancy way of referring to your backyard.

Those days are gone, replaced in large part by one-sport athletes on travel teams that play and practice year-round.
The result, according to a recent poll by the National Alliance for Youth Sports, is that almost 70 percent of kids in the United States stop playing organized sports by the time they turn 13.

“It is certainly a different time; the pressures have changed for kids,” explains Dr. Greg Reeds, a sports psychologist and professor at Canisius College. “There’s an emphasis on making travel teams and premier teams, and parents trying to live out their own dreams through their kids, even though the odds of making the pros are something like one in 12,000. But I suppose every parent thinks it’s their kid that’s going to make it.”

It’s a significant change over the course of a generation.

“The joy of kids’ sports used to be the backyard, just playing and having fun using spontaneity and creativity. Adults today have airmailed in all adult values on youth sport and it’s sapped the joy out of what kids like to do so much. It’s the playground mentality that I wish could return for some of these kids,” said Reeds.

As kids enter their teenage years, there are the additional unique pressures of high school sports. Many kids have gone from being the big fish in a small pond to swimming with sharks. And with so much emphasis being put on kids to specialize in one sport, the pressures and politics of making a high school team are more than many kids are ready for — especially when they are already navigating the minefields of puberty, friendship and peer pressure.

Reeds says that’s often when they walk away.

“It takes guts for these young kids to try out for a team. They’re in ninth grade and they want to show the coach what they’ve got. They are given two weeks of practice to prove themselves on a JV or varsity team, where many of the spots are already spoken for by older kids. If they don’t make it, that cycle of getting cut and not feeling good about yourself begins. Once the JV option is gone, sports at the high school level can become pretty exclusionary. Being cut early and having no place to go is the sad part of sports.”

Other reasons for opting out

For many kids, the pressure to commit to a travel team or play a sport year-round starts early; experts caution parents to allow their kids to go at their own pace.

Being cut from a team isn’t the only reason teenagers are walking away from sports, however. With so many kids now specializing in just one sport, the commitment — both physical and emotional — can become too much to handle. Not to mention the constant pressure of being expected to succeed at the highest level by parents and coaches.

The inevitable burnout from doing just one sport for 12 months a year can happen at any time.

“Kids do get more isolated in a sport at the high school level nowadays,” says Lucian Forcucci, assistant JV boys lacrosse coach at Orchard Park High School. “Years ago, maybe we’d have a softball girl that was just a really good athlete, and she’d play lacrosse as her second sport. Now, we are seeing that girl focus solely on her sport year-round.”

Enjoying the sport and growing the game from a young age is why Forcucci revived the Orchard Park Girls Lacrosse summer program two years ago with OP varsity coach Kristen McGuiness.
For Forcucci, the focus is on fun.

“You want them to enjoy the sport, and leave practice wanting to come back,” Forcucci explained. “At that level it shouldn’t be so much about playing games or the Xs and Os. We try to incorporate as many creative games as we can that emphasize the skills of lacrosse, while making it fun for them.”

Sacred Heart faces off against Mount St. Mary’s in lacrosse, a sport that Orchard Park is currently focused on growing from a younger age.

Rudy Pompert has been around the game of soccer most of his life, and has seen firsthand how the long-term goals of the parents don’t always align with what their child really wants to get out of the game.

While the kid is playing for fun and healthy competition, mom and dad are envisioning a full ride to college and multi-million dollar professional contracts.

“You see it a lot where the parents are almost more obsessed with their kids going to premier [leagues]or being on these really competitive teams,” says Pompert, the Delaware Soccer Club’s Director of Soccer and former head coach of Buffalo State’s men’s soccer team. “But without any pressure or anonymously asking the kids if they want to play with a premier team or just with your friends, I think a lot of kids would say they just want to play with their friends.

“Do (parents) really ask the kid what they want, and does the kid have the freedom to answer that question honestly without being fearful or parental pressure? Because at the end of the day, you don’t want to disappoint your parents who think you should be playing for a premier team and a college scholarship,” said Pompert.

Fortunately the kids who have been “pushed out” of sports by parents, politics and coaches do still have options. Numerous local leagues offer seasonal house team programs in their respective sports that allow kids to continue playing without the added pressures of extra games, practices and workouts, giving them the chance to just play the sport because they love it.

Stephanie Wippert, 17, started playing hockey with the Shamrocks program at age six, and had moved on to the Amherst girls’ 12U travel team. But when she didn’t make the travel team the following year,  she didn’t let it deter her.

An active participant in several sports throughout her young life, Stephanie opted to play in the Amherst girls’ house program rather than try out for another travel team, or quit the game.

She hasn’t looked back.

Stephanie Wippert, 17, says house hockey is a great way for kids who’ve started later or want to bring the stress level down a notch.

“Going into house hockey, I didn’t know what the expectations were going to be, but I knew it wasn’t as big of a commitment as travel was,” said Stephanie. “In travel if you missed one practice due to a doctor’s appointment or you had a lot of homework that night, you could be missing learning new plays. And by not knowing the new play for the upcoming game, you could be put onto a lower line than usual.

“House, on the other hand, is always such a good time. Everyone goes at their own pace. In house, you can miss a practice or two and it’s not a big deal. House hockey is definitely something kids who want to play hockey but may have started later, or want to take the stress level down a notch should do or at least think about.”

Without the year-round demands of a travel team, Stephanie has also been able to devote more time to the other sports she loves as much as hockey. Now in her senior year at Sacred Heart Academy, Stephanie even played lacrosse for the first time last year. She’s also an avid golfer who’s played on her high school team for four years.

Her father and hockey coach, Bill Wippert, says he knows exactly what his role as coach should be every time he steps on the ice for practice or goes behind the bench at a game.

“At the youth or house league level, I will try to help the kids get better, but I won’t be the coach that makes them quit. I love the thought of them liking and playing the game for years to come,” said Wippert.

“Sport needs to have a different philosophy and mentality. Intrinsically, it should feel good and make you feel good about yourself,” said Reeds. “We learn to compete, we have great teammates, and we’ll make memories that last a lifetime.”

You only need to roam the bleachers at a soccer, football or hockey game to realize that parents are often more intense than the kids playing the game. Even with visible signage at most venues promoting proper parent etiquette, it often goes too far.

Take, for example, the local hockey referee that was harassed twice by the same parent following a hockey game at Holiday Twin Rinks last season. Angered by an injury to his son during the game, the fuming father greeted the referee with some choice words as he left the ice. That was followed by a trip to the referee’s locker room, where he burst in and challenged the officials to a fight. It took a police presence to restore order.

“I feel awful for the young officials in the game,” says the referee, who must remain anonymous per USA Hockey rules. “The behavior of parents and coaches has cost this game some really talented people because they decide the harassment isn’t worth it.”

An Ohio youth soccer organization went as far as creating “Silent Sundays” more than 15 years ago. Frustrated by erratic parent behavior on the sidelines, the Ohio North Soccer Association implemented a program where parents were encouraged to avoid cheering or jeering during games to eliminate sideline distractions. The program drew immediate raves from the players, and has since gained momentum in various states nationwide.

Here’s a dose of reality: According to the NCAA’s 2016-17 Guide for the College-Bound Student Athlete, there are more than 480,000 student-athletes – and fewer than two percent will turn pro in their sport. There were 1,093,234 high school football players in the nation last season. At the collegiate level there were 71,291. Of those playing NCAA Football, only 1.6 percent moved on to the NFL.

Of course, sports also offer huge benefits, especially to kids who may be otherwise disenfranchised by family income or disabilities. Here are five sports programs that show there’s more to life than the final score.

First Tee of WNY: First Tee’s mission is to encourage and inspire positive values and healthy choices in the next generation of Western New Yorkers through the experience of golf. The five-level program is for ages 7 and up, and integrates life skills teaching within the game of golf, including etiquette, goal setting and conflict resolution.

SABAH: SABAH stands for the Skating Association for the Blind and Handicapped, but the organization provides a multitude of athletic and fitness opportunities to help enrich the lives of individuals with special needs. The annual Celebration on Ice is the group’s showcase event, involving hundreds of participants every spring.

Hasek’s Heroes: Launched in 2001 by Buffalo Sabres’ Hall of Famer Dominik Hasek, the goal of Hasek’s Heroes is to be a developmental hockey program for economically disadvantaged kids in Buffalo. Based out of rinks at Riverside and Cazenovia Park, the organization also includes an off-ice component with academic tutoring and mentoring programs.